The NBA owners and Players Association are just days away from the July 1 expiration of the current collective bargaining agreement. The CBA governs, among many other things, how the giant pie of money created by their sport is divided. The owners are looking for massive changes to the system to essentially guarantee their ability to generate profits while the players want to be fairly compensated for the their part in generating the piles of cash. 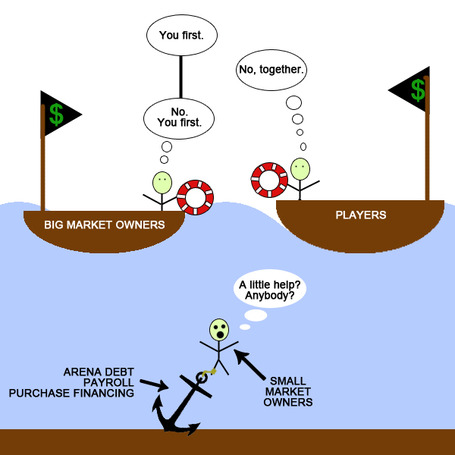 The players in the Phoenix Suns locker room spoke openly all last season about the potential work stoppage. The message was preparation. They know that their only chance to sustain an extended lockout against the much wealthier owners is to maintain their solidarity and that means saving money so they hold out for a better deal.

The guy sharing his wisdom on this (as with so many other matters) is Grant Hill. Hill recently repeated comments we'd heard many times before.

Hill: Players learned from lockout - NBA - Yahoo! Sports
"You hear a lockout and you don't know what that means," Hill said. "I think we are all sort of conditioned right when Labor Day and October and November roll around, you start playing. And all of the sudden you're not.

There's certainly time for a lockout to be avoided and David Stern has made it clear that they can extend the clock to buy more time if the two sides are actively nearing a solution. Just like the NFL did in March, it's likely we will see such an extension as both sides want to give every appearance of trying hard to resolve the issues before the owners pull the plug. Let's all just hope there's a fair solution to be found before this gets really ugly.