The men's Semi Finals of the 2011 French Open are finally here and with the top four seeds facing each other we will hopefully be treated to some competitive matches. These guys rolled through their early matches with only five extra sets needed out of the 19 total matches these guys have played. Maybe their tennis at Roland Garros has just been that good or maybe the competition just hasn't been up to the task. Either way, Friday will feature Rafael Nadal against Andy Murray (4) and Roger Federer (3) vs. Novak Djokovic (2).

Novak Djokovic and Roger Federer have a long history over the past six years. They've played against each other 22 times with Federer winning 13 of those meetings. More recently however, the advantage has swung towards the Serb with Novak taking all three of their meetings in 2011. On clay they've played just three matches with Roger taking two but Novak winning the most recent match in Rome, 2009.

The odds makers put Novak as a slight favorite with the line on him set at -300 and +225 for Federer.

Both of these guys are playing great tennis. Federer has won all five of his matches in straight sets and Djokovic only need only extra set to beat Juan Martin Del Potro. Both of these guys top the charts in first serve points and percentage and Federer has been pin-point accurate with his serve.

This should be a great match between the two of the world's top tennis players.

The first match of the day on Court Philippe Chatrier starts at 2:00 p.m. Paris time. The Semi Finals will be broadcast on TV by the Tennis Channel who will also be live streaming the matched online starting at 8:00 a.m. ET / 5:00 a.m. PT. Nadal vs. Murray goes first, followed by Djokovic vs. Federer which is on NBC and with live streaming at NBCSports.com starting at 11:00 a.m. ET and tape delayed for an 11:00 a.m. showing everywhere else in the country. 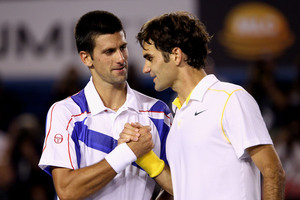 MELBOURNE AUSTRALIA - JANUARY 27: Novak Djokovic of Serbia and Roger Federer of Switzerland embrace at the net after their semifinal match during day eleven of the 2011 Australian Open at Melbourne Park on January 27 2011 in Melbourne Australia. (Photo by Clive Brunskill/Getty Images)