NBA Finals Not Over Yet, But Heat Have Mavericks By The Horns

Share All sharing options for: NBA Finals Not Over Yet, But Heat Have Mavericks By The Horns

The NBA Finals are only one game into this series but already things are leaning heavily towards the Miami Heat. The Dallas Mavericks managed to keep things close enough on the scoreboard but the slower tempo and rebounding deficiencies don't bode well. LeBron James has proven to be the best closer in the 2011 NBA Playoffs and he's surrounded by a higher class of talent than Dirk Nowitzki.

Dallas fans over at Mavs Moneyball remain optimistic however, as they see the Mavericks bench coming through and hitting shots that were open, but missed in Game 1. "There are devastating losses, and then there are palatable ones. I believe that Tuesday's loss to the Heat in game one falls into the latter category for multiple reasons."

Here's the full schedule for the series. 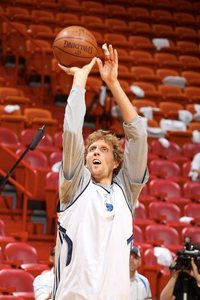