The women's Semi Finals at the 2011 French Open continued to the low-drama theme of this tournament. Maria Sharapova was favored to beat Na Li so her defeat was a bit of a surprise, but considering the Russian's strength is the hard courts and not clay it's not a total shocker either. Francesca Schiavone is one of the few true clay-court specialists who uses her mobility and defense to beat Marion Bartoli. Shiavone and Li will meet in the Finals of the 2011 French Open on Saturday.

Li beat Sharapova in two sets, 6-4, 7-5 with a strong wind contributing to the Russian's troubles. Sharapova had 10 double-faults in the match including the final point that sent her home. Li is the first Chinese player to reach the Finals of the French Open.

"I'm sure they showed the match ... in China, so ... maybe children, they saw the match, and they think that maybe one day, they can do the same-or even better," said Li.

Schiavone had an even easier time against Bartoli with a 6-3, 6-3 victory to return the defending French Open champion to the Finals on Saturday. Hopefully, the men's Semi Finals on Friday between Rafael Nadal and Andy Murray and Roger Federer and Novak Djokovic will provide more intrigue. 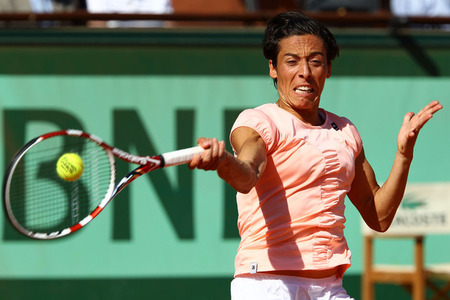