The 2011 French Open is entering the home stretch. The Semi Finals schedule begins on Thursday with both matches on TV at ESPN 2 and streaming live online at ESPN3.com. The first match of the day has Na Lin (6) from China against Russian, Maria Sharapova (7). Sharapova is all that's left in the women's draw as far as star power and with a 26-5 2011 WTA record her tennis is at least a match for her off court activities.

The second match in the women's Semi Finals is Marion Bartoli (11)  vs. Francesca Schiavone (5) in a France vs. Italy European duel. Schiavone is 4-1 against Bartoli in their career meetings with four of those meetings on hard court and one on the grass. They've never played on the clay. The Italian fifth seed is favored by the odds makers (-175).

Sharapova and Lin have played seven times with Maria taking five of those matches, including their one meeting on clay at the 2009 French Open in the Fourth Round. Sharapova won that match, 6-4, 0-6, 6-4 in their only three set duel. At -225, Sharapova is favored by the betting experts. 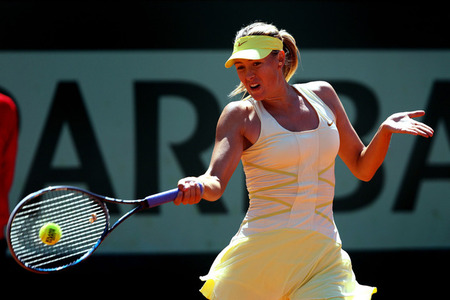