Rethinking LeBron James: A Superstar And The Stifling Weight Of Expectations

Share All sharing options for: Rethinking LeBron James: A Superstar And The Stifling Weight Of Expectations

Despite the fact that the NBA season has come and gone, questions continue to arise about LeBron James and his heavy-handed performance in the Finals. The whole spectacle is uniquely unexplainable, and perhaps for that reason, endlessly fascinating.

But maybe it wasn't his fault. Maybe we are partially to blame. He failed to live up in our eyes. To our expectations.

What were those expectations founded on? The endless comparisons to Michael Jordan? That's senseless. Michael Jordan spoiled us. A once-in-a-lifetime drive, that we are privilege to have even watched. Expecting similar greatness is unfair.

Other legends of the past? Individuals from a different time and era that never faced the 24/7 social media feeding frenzy LeBron exists within. That have no semblance of the experiences, trials, and hardships he had to overcome. Each one of us is different, who's to say what would have happened if Magic Johnson became this much of a global pariah in his heyday.

His whole life, LeBron James just wanted to be loved. With no father figure, he found family in a tight-knit group at St. Vincent-St. Mary High School. The ‘Fab Five', as they were called, genuinely cared for each other. Through no fault of their own, they became celebrities, the likes of which no high-schooler really should. Groupies, autographs, jetting across the country to play in packed arenas.

Not to sound facetious, but that's a pretty hard way to grow-up.

We begin the development from boys into men throughout our teenage years, adapting to the world around us as we see fit. Needless to say, LeBron James did not live in a normal adolescent environment. A high-schooler growing up an icon, not only in his hometown, but throughout the globe.

And he was loved, adored. He believed that's how the world should be. Who can blame him? Deep down, maybe it was the only thing he truly wanted.

That love followed him throughout his life, until the one day it didn't.

And now we are the ones to sit back and judge, saying LeBron should handle things one way or the other? He's only 26. Really, he's still just a kid.

Can any of us really understand what its like to have the whole world melt from a place of undying love to one of immense hatred at the flick of a switch? It visibly bothers him to a degree not normally seen from our athletic heroes. All you've ever wanted to do is make people happy, and suddenly you're the villain? That's a proposition I would never want to face.

Did he bring it upon himself? Sure. Does he lack the self-awareness needed to have prevented these mistakes? Absolutely. Did his inner circle of enablers afford him a lack of public goodwill? Without question.

But they are his friends. His family. How can one man ask another to abandon his family?

That does not make him a bad person. That does not make him deserving of this flood of criticism. At this point, the man truly can't win. If he cries after the finals, he's too emotional; if he refuses the feed into the media and plays it straight, he doesn't care about the game enough; he gets defensive about the absurd amount of condemnation, he's out-of-touch and immature. Regardless of what happens, people will find a way to point the finger.

Maybe he didn't want to be the next MJ. He often refers to his time at St. Vincent-St. Mary as the best time of his life. Maybe he just wanted that back. To revert to a time less complicated, and just have fun playing basketball with his friends.

After all, didn't he do the thing we want from all our athletes? To put the ideals of winning and team before the tarnish of money. The Big 3 made a fundamentally sound decision if judged by the ideals we pretend to hold dear. It just could have been handled better.

He's still human. He made a mistake. How long will we feast on that? When will the stain be washed clean, and acceptance the tune of the day?

To be sure, seeing someone get their much-needed comeuppance is a delicious prospect, but enough is enough. Time heals all wounds, and maybe that is the point. As a culture, short-term memory has never been our strong suit. Sooner or later the boos will become cheers, and hopefully LeBron James will find whatever it is he's looking for. 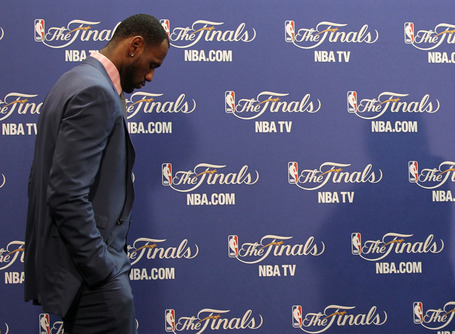 LeBron James, #6 of the Miami Heat, walks into the interview room to answer questions after the Heat were defeated 105-95 by the Dallas Mavericks in Game Six of the 2011 NBA Finals at American Airlines Arena in June 2011 in Miami, Florida. (Photo by Mike Ehrmann/Getty Images)