Benavidez Wins On TKO; Fight Stopped In Fourth Round

Share All sharing options for: Benavidez Wins On TKO; Fight Stopped In Fourth Round

The homecoming that Jose Benavidez Jr. had long envisioned and looked forward to almost didn't happen.

Benavidez' father and trainer, Jose Sr., asked his son if he wanted to cancel the fight in the days leading up to it. The younger Benavidez, now 12-0 with 11 knockouts, chose to punch through the pain even though doctors cautioned against it and suggested postponement. Benavidez had hurt his right hand hitting his previous opponent on the top of his head during that fight, and hurt his left hand over-using it during training for Saturday's fight.

"Thank God everything came out good and I stopped the guy," Benavidez Jr. said. "When I'd hit him (Alarcon) with the jab, my left knuckle, the big one, would hurt. And my right wrist."

Consequently, Benavidez, still clearly the better and more skilled fighter Saturday, allowed Alarcon to tie him up more often and also struggled to deal with some Alarcon's tactics at times, but made sure the fight didn't go the six-round distance. 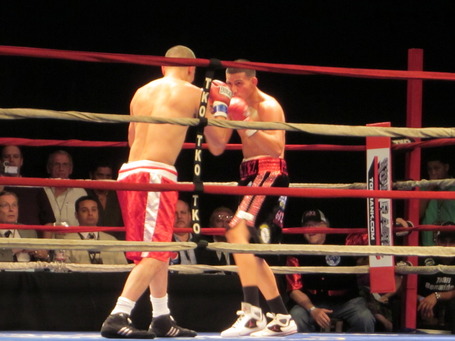 Benavidez (in black trunks above) forced Alarcon to take a knee with a hard shot in the second round, then scored with a left hook for the first knockdown of the fourth round. The second knockdown was courtesy of a straight right hand; a body shot made Alarcon groan and another right forced the referee to step in and stop the fight.

Benavidez will likely see a doctor and be forced to rest his hands for a couple of weeks before being allowed to punch something or someone again. He'd been in therapy for the injury. But there was no skipping his first fight in his hometown, especially with an adoring fan base to please.

"My first main event and I'll never forget it," Benavidez said, smiling. "Just knowing that I was fighting at home with my people here watching me... it motivated me a lot to train hard and get ready for this fight."

His father said training will continue for Benavidez but will be adjusted for the time being while his hands heal. Benavidez Sr. said the hand injuries aren't fractures, just muscle injuries.

"He didn't want to cancel because there were so many people here that wanted to see him," Benavidez Sr. said. "A lot of family, a lot of people here in Arizona."

Those people held signs and chanted "Junior! Junior!" as Benavidez systematically broke down Alarcon with flurries of jabs and effective left hooks and body blows. Alarcon took two standing-eight counts in the fourth round before Benavidez hit him with a punishing jab to the head, causing the stoppage.

Alarcon (14-18) had faced some quality opponents in his career but had no answer for Benavidez' left hook, after which Benavidez stepped back so as to avoid a counter punch. The strategy worked well.

Benavidez put on a show for his faithful, entering the ring to blaring Mexican music with members of his entourage carrying Mexican and American flags. The fight was a co-main event along with a six-round lightweight matchup of Oscar Meza from Sinaloa, Mexico and Kelly Wright of St. Louis. Meza (22-4) scored a third-round TKO for the 24-year-old's 18th career knockout.