Game 5 of the 2011 NBA Finals belongs to the Dallas Mavericks who played their game and beat the Miami Heat in a high-scoring affair. We always thought that if the scoring was over 100 it would favor Dallas but it was the Game 4 win (86-83) that the Mavericks won despite Dirk Nowitzki's illness that was even more impressive. The schedule now has the series moving back to to Miami for Game 6 on Sunday and Game 7 (if needed) on Tuesday.

The Miami Heat, as coach Erik Spoelstra said in his postgame press conference, need to get the game back to being a defensive grind. Their offense isn't good enough to keep up with the Mavericks if they are going to allow Jason Terry (21 points) and J.J. Barea (17 points) to go off.

There's no word yet on the status of Dwyane Wade who left the game due to a hip contusion. Wade ended up playing 34 minutes and scored 23 points and eight assists. LeBron James had a triple double (17 points, 10 assists and 10 rebounds) but only had two points in the fourth quarter. 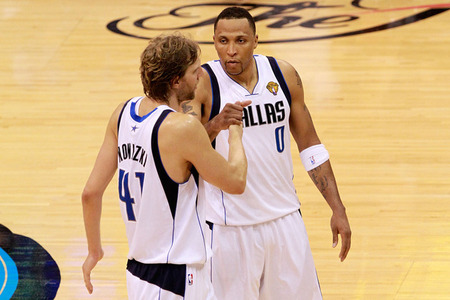 DALLAS, TX - JUNE 09: (L-R) Dirk Nowitzki #41 and Shawn Marion #0 of the Dallas Mavericks celebrate their 112-103 win against the Miami Heat in Game Five of the 2011 NBA Finals at American Airlines Center on June 9, 2011 in Dallas, Texas. (Photo by Tom Pennington/Getty Images)