Shaq Retires How He Came In, With A Tweet

Shaq has called it quits and in true Big Man fashion he announced the news with a Tweet to his 3.8 million plus followers that linked to a brief video in which the massive star said, "We did it, 19 years baby, I want to thank you very much. That's why I'm telling you first, I'm about to retire. Love ya."

We love you too, unless we hate you. We can't decide.

Shaquille O'Neal was without doubt one of the greatest players to play the game. He literally changed the rules of the game. He made the careers of countless players who owe their contracts to playing with or against Shaq. From shooters who benefited from the open looks he provided to the giant stiffs who were given roster spots simply because they were large enough to stand next to O'Neal without looking like midgets.

Shaq brought a special brand of personality and competitive desire to the NBA. I had the pleasure of covering him during his brief time with the Suns. I'll never forget trying to get quotes from him after practice with my arm fully extended to get the recorder as close as possible to his quiet, mumbly words as sweat dripped on me from his giant head. 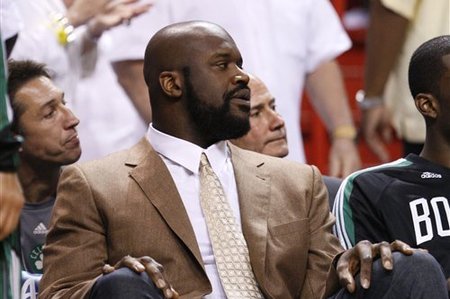 Boston Celtics player Shaquille O'Neal sits on the bench during the first half of Game 5 of a second-round NBA playoff basketball series in Miami, Wednesday, May 11, 2011 against the Miami Heat. (AP Photo/Wilfredo Lee)