The 2011 French Open continues to produce some underwhelming matches at the top of the men's draw. Both Rafael Nadal (1) and Andy Murray (4) won their Quarter Finals matches in straight sets. With Novak Djokovic (2) and Roger Federer (3) having already advanced, the final four is set and holds the top four seeds. While the women's singles draw is total chaos, the men's couldn't be more predictable.

Murray and Nadal will match up in the Semi Finals while Federer and Djokovic will battle on the clay. Hopefully, the tennis on the men's side will finally produce some good action and drama that's been missing so far from the 2011 French Open. 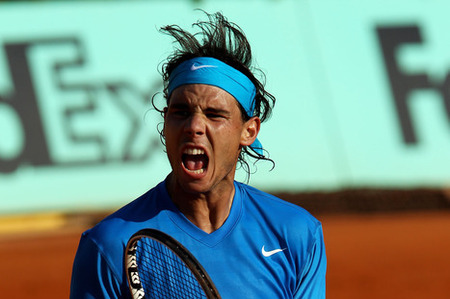 PARIS, FRANCE - JUNE 01: Rafael Nadal of Spain celebrates a point during the men's singles quarterfinal match between Rafael Nadal of Spain and Robin Soderling of Sweden on day eleven of the French Open at Roland Garros on June 1, 2011 in Paris, France. (Photo by Alex Livesey/Getty Images)