There's very little question that the Dallas Mavericks have little to no chance to beat the Miami Heat in the 2011 NBA Finals without their star, Dirk Nowitzki. The Heat are already favored by the Vegas odds makers (-180) to win the series and after slowing things down and winning Game 1 at their tempo that bet looks even safer. Fortunately, it appears that the injury Nowitzki suffered to his finger on his non-shooting hand won't impact the series.

Late in the game Dirk swiped at a ball and managed to tear a tendon in the middle finger of his left hand. Dirk is right-handed. X-rays showed no broken bones and another word for "torn tendon" is "sprain". Looking at how he had the finger wrapped after the game, the injury appears to be high up on the finger as opposed to nearer to the hand.

Nowitzki doesn't seem concerned and there's no reason to think we should be either. "I have to wear a splint probably for the rest of the playoffs, for a couple of weeks. But it will be all right."

This type of injury is common in basketball and while it will probably be a bit painful and bothersome, Nowtizki has proven to be a tough guy when it comes to playing through pain. It's going to take a lot more than a sprained finger on his non-shooting hand to slow down the German marksman.

The bigger concern for Dallas is how they can get some of their other guys going. They are in for a very short series if they are only getting 15 points off their bench as they did in Game 1. The Heat will find it difficult to get points from their role players as well which is why these games need to be over 100 points for the Mavericks to be competitive in the 2011 NBA Finals. Their depth and variety of offensive weapons is the concern for Dallas going into Game 2, not Dirk Nowitzki's injured finger. 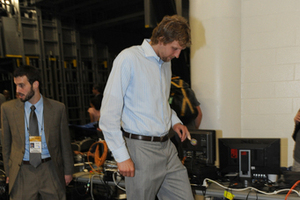 MIAMI, FL - MAY 31: Dirk Nowitzki of the Dallas Mavericks looks at his injured finger as he leaves the arena following the 92-84 loss to the Miami Heat in Game One of the 2011 NBA Finals on May 31, 2011 at the American Airlines Arena in Miami, Florida. (Photo by Andrew D. Bernstein/NBAE via Getty Images)