The 2011 NBA Finals started off as many predicted. The Miami Heat threw far more defensive pressure at the Dallas Mavericks than anything Dirk Nowitzki and Jason Kidd dealt with so far in the NBA Playoffs. Game 1 went to LeBron James and the hated team from South Beach who controlled the pace and thoroughly enjoyed the low scoring grind won by the Heat, 92-84.

Dwyane Wade and LeBron James scored  22 and 24 with an additional 19 from Chris Bosh. The real difference though was Udonis Haslem's return. His 12 points and solid defense kept Nowitzki busy enough to allow the rest of the Heat to stay home on the shooters. The Heat bench, considered a weakness against Dallas' depth, won that battle 27-17.

In Game 2, Dallas is going to have to find more ways to put the ball in the basket. They were held to just 37 percent in the game and outside of Dirk's 27 points the Mavericks didn't get enough from anyone else. Shawn Marion chipped in 16 points and Jason Terry, 12, but Peja Stojakovic and J.J. Barea have to do better than two points. 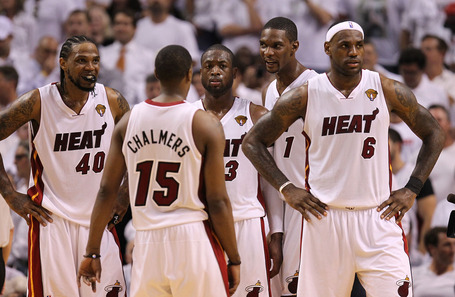 MIAMI, FL - MAY 31: (R) LeBron James #6 of the Miami Heat reacts with teammates Mario Chalmers #15, Dwyane Wade #3, Chris Bosh #1 and Udonis Haslem #40 in the fourth quarter while taking on the Dallas Mavericks in Game One of the 2011 NBA Finals at American Airlines Arena on May 31, 2011 in Miami, Florida. (Photo by Ronald Martinez/Getty Images)