Preakness Stakes 2011: Animal Kingdom In, Dialed In And Mucho Macho Man Too

Share All sharing options for: Preakness Stakes 2011: Animal Kingdom In, Dialed In And Mucho Macho Man Too

The 2011 Preakness Stakes field would not have been the same without 2011 Kentucky Derby winner, Animal Kingdom. Good news from trainer Graham Motion Monday that he will take his horse to Pimlico and give the Triple Crown at least a possible winner.

"I never anticipated winning the Derby, so it's a lot to take in," Motion said Sunday morning at Churchill Downs. "Yesterday was surreal. It's an odd feeling to have won the Derby, and then you've got to start thinking about winning the Preakness. It's a little daunting."

Other Derby favorites and finishers that are confirmed for the Preakness include:

In addition to Animal Kingdom, Mucho Macho Man (third in the Derby) and Dialed In (eighth) are definite. Shackleford (fourth) and Santiva (sixth) are possible.

In other news, Archarcharch underwent successful surgery to repair a left front condylar fracture although the injury ended his career. "Archarcharch made it through surgery like a champ. His racing career is over. Too much damage, but he is good and that is what is important."

Pants on Fire is almost certainly a scratch for the Preakness due to internal bleeding from the exertion of the race. Comma to the Top is out 8 to 12 weeks as well due to surgery to remove a bone chip.

Late scratch Uncle Mo is not expected to race the 2011 Preakness. An early favorite to win the the Kentucky Derby was a late scratch due to a still undiagnosed stomach illness that has the horse eating poorly and losing wieght.

The following is an early and unofficial look at the 2011 Preakness field via this blog: 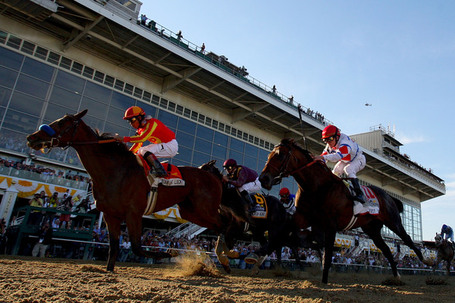 BALTIMORE - MAY 15: Lookin at Lucky, riden by Martin Garcia crosses the finish lin ahead of First Dude, riden by Ramon Dominguez and Jackson Bend, riden by Mike Smith during the 135th Preakness Stakes at Pimlico Race Course on May 15, 2010 in Baltimore, Maryland. (Photo by Matthew Stockman/Getty Images)