The 2011 Preakness Stakes is the second jewel in the triple crown. Kentucky Derby winner, Animal Kingdom, is still not a definite in the field. It's hard to imagine him not entering the race and going for the biggest prize in sports. Over the next week or two we will learn more about field as horses are officially entered.

One name to keep an eye on is Uncle Mo, who was a late scratch from the 2011 Kentucky Derby but could be ready to run by the Preakness. Derby post time favorite, Dialed In had a disappointing finish on Saturday but should perform better on the shorter track at Pimlico but only if he gets a better jump out of the gate.

Animal Kingdom will run the Preakness while Uncle Mo is out.

The Preakness schedule calls for a 6:25 p.m. ET post time on May 21. NBC will once again have the live TV broadcast. The post position draw is on tap for May 18. Odds for the race will be available after that time.

The field is starting to take shape with this report about horses who were not at the 2011 Kentucky Derby expected to race the 2011 Preakness : Astrology, Concealed Identity, Dance City, Flashpoint, King Congie, Norman Asbjornson, Prime Cut, and Sway Away, and possibly Mr. Commons. 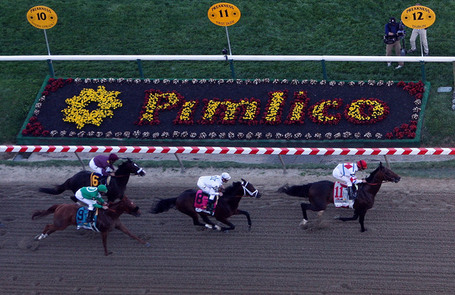 BALTIMORE - MAY 15: First Dude, ridden by Ramon Dominguez #11 leads Super Saver, ridden by Calvin Borel #6, Caracortado, ridden by Paul Atkinson #9, and Jackson Bend , ridden by Mike Smith #8 on the font strech during the 135th running of the Preakness Stakes at Pimlico Race Course on May 15, 2010 in Baltimore, Maryland. (Photo by Jim McIsaac/Getty Images)