It's been difficult to watch the 2011 NBA Playoffs if you are a fan of the pure point guard. Derrick Rose and Russell Westbrook have been touted as the future of the position by many and Rose even won the MVP this year for his flashy play. Unfortunately. however, both Rose and Westbrook have had their flaws exposed by the postseason and have reverted back to the Allen Iverson and Stephon Marbury model of volume shooting.

Chris Paul, Steve Nash and Deron Williams are sitting home and Jason Kidd is playing off the ball now so what we are left with is high volume scoring that in the past was left to wing players like Kobe Bryant, Dywane Wade, and LeBron James.

Fortunately, the playoffs are doing what they do and exposing the flaws of these young guards so they can learn to play the position and involve their teammates. In the mean time, we answer the question: Who is the worst "chucker", Derrick Rose or Russell Westbrook? 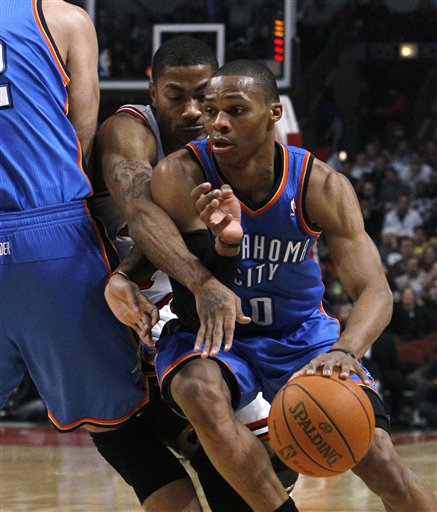 Chicago Bulls point guard Derrick Rose, center, tries to squeeze through the screen as Russell Westbrook drives to the basket during the first half of an NBA basketball in Chicago. (AP Photo/Charles Rex Arbogast)

Westbrook's Oklahoma City Thunder are down 2-1 in their series to the Grizzlies and the Bulls are tied 2-2 to a very flawed Atlanta team.

In his four games in the Bulls-Hawks series Rose has averaged over 28 field goal attempts per game and only once has he shot over 41 percent. That puts Rose in elite company.

Only 15 times in NBA Playoff history has a player averaged over 28 shots per game and only four times did one of those high volume shooters average under 41 percent shooting.

Rose plays with talented teammates but seems unable or unwilling to create opportunities for his guys. Some of that has to fall on the coach (Coach of the Year Tom Thibodeau) but too many times you can watch Rose drive into a lane packed with 5 defenders and completely ignore Deng or Korver wide open at the three-point line.

Westbrook's numbers aren't quite so historically selfish, but he does play along side the NBA's scoring leader, Kevin Durant. There's no reason why on a team that features Durant and plays James Harden 28 minutes per game that Westbrook should be taking 22 shots per game.

We all watched the Thunder score just 10 points in the fourth quarter against the Grizzlies as they blew a 16-point lead and lost a game they were in control of. It will be interesting to see if Durant's apparent displeasure translates into a change in approach for Westbrook. I wouldn't count in it though, since that game wasn't the first time we've seen Russell ignore his more talented teammate in the 2011 Playoffs.

Just as a matter of comparison, consider Chris Paul who blew both Rose and Westbrook out of the water in point guard play. Paul shot over 54 percent from the field (47.4 percent from three) and averaged 11.5 assists playing with a far less talented team in the first round.

So which earns the honor of being the Most Selfish Playoff Point Guard? Rose has the edge but only because his numbers are historically bad. Westbrook is a close second though. He's playing with a once in a generation talent in Kevin Durant and his number one job should be setting up KD.