The 2011 Kentucky Derby is just hours away with a post time of 6:24 p.m. ET at Churchhill Downs with TV coverage starting at three hours prior on NBC and before that on Versus. The 137th Run for the Roses features a list of favorite contenders that included Dialed In, Archarcharch and Nehro. Unfortunately, there will only be 19 horses in the field since Uncle Mo was scratched on Friday due to a stomach illness.

Before the big race, however, there will be 13 races on the under card starting at 10:30 ET. Track conditions are Fast and Firm and the weather looks to be iffy. Temperatures will be in the upper 60's with thunderstorms off and on throughout the day. There's a 50 percent chance of rain at post time.

Dialed In, the 4-1 favorite in the morning line, will be riden by jockey Julien Leparoux and is trained by Nick Zito. Zito has won at the Kentucky Derby two other times in his career. 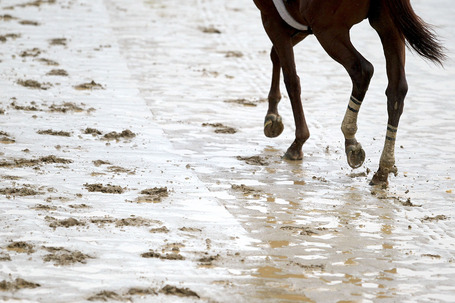 LOUISVILLE, KY - MAY 03: A rain soaked track runs during the morning exercise session in preparation for the 137th Kentucky Derby at Churchill Downs on May 3, 2011 in Louisville, Kentucky. (Photo by Matthew Stockman/Getty Images)