Share All sharing options for: Derrick Rose Takes Over 'Most Selfish Playoff Star' From LeBron And Kobe

It might seem like I just hate Derrick Rose given all the hate I've sent his way this week. I can assure you, that's not the case. I love watching Rose's brilliant play as much as anyone, but what I don't like is selfish basketball and unfortunately, that's what we are getting from Rose right now.

For years LeBron James and Kobe Bryant were criticized for dominating the ball and not trusting their teammates in the NBA playoffs. Rose passed them both this year in shot domination and yet very little is being said about it. Even worse, Rose joins Allen Iverson and Stephon Marbury on unflattering list of high-volume, low-efficiency playoff scorers.

Of all the stars in the 2011 NBA Playoffs, Rose has the highest percentage of field goal attempts on his team. Rose has taken 27.2 percent of the Bulls' shots which is more than Kevin Durant (24.7) and Rusell Westbrook (26.2) and a fair bit more than Kobe Bryant (24.9) LeBron James (23.8) who isn't even leading his team in most shots taken. 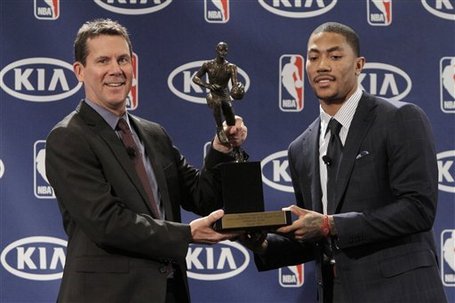 You could argue that of those named, Rose plays with the worst roster or at least isn't next to another All-Star caliber player (although Carlos Boozer is a two-time All-Star). It's a fair enough point, but consider that Rose's domination of his team's shots are even greater than what we saw from LeBron in Cleveland last year and is right up there with James 08-09 Playoffs which earned him derision for his many isolation plays.

To make matters worse, of all the players left in the 2010-11 NBA Playoffs averaging over 15 field goal attempts per game, Rose has the worst field goal percentage at 37.9 percent. The other selfish point guard, Westbrook, is next at 40.3 percent.

Taking things to an historic level, according to Basketball-reference.com's search feature only three other point guards in the last ten seasons of NBA playoff basketball have averaged over 20 field goal attempts per game and shot under 40 percent from the field.

Derrick's shooting might be down due to an ankle injury. That's understandable, but when a great point guard is injured, they find ways to get open shots for their teammates. At least that's the standard of play set by Steve Nash.