Those in the horse racing business know that of the contenders in the field for the 137th Kentucky Derby no horse has a more compelling story than Mucho Macho Man. This colt has been surrounded by death at every turn and on each occasion either the horse or those around him have prevailed.

Mucho Macho Man's story started at birth. He was born three weeks late and was thought stillborn when he finally arrived. Thoroughbreed Times recounts the story:

"I went over there and he was lifeless. I worked on the foal to see if I could revive him. My husband was there and my daughter was there. It was June 15, Father's Day. We prayed over him. We thought he was a dead foal, and he stood up and ran off. He ran off. The farm manager's wife said, 'You ought to name him Lazarus.' That's what he was called, up until he left for [trainer] Bill White."

Mucho Macho Man was sold as a two-year-old to Dean Reeves and training responsibilities went to Kathy Ritvo in 2010. Ritvo herself is a heart-transplant survivor who suffered from a disease that caused deterioration the muscle in her heart and required the transplant in 2008. Like her horse, Ritvo also beat the odds to survive.

The third part of this horse's death-cheating story is the rider, Eibar Coa. Coa was thrown riding another horse just a day before he was set to race Mucho Macho Man in the Risen Star event. Coa was paralyzed in the accident but has since recovered.

Current odds on Mucho Macho Man in the 2011 Kentucky Derby are 14/1. With the kind of luck surrounding this horse you might want to take a close look at betting him. 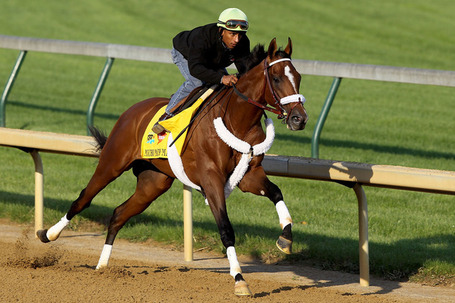 Mucho Macho Man runs during the morning exercise session in preparation for the 137th Kentucky Derby at Churchill Downs on April 30, 2011 in Louisville, Kentucky. (Photo by Matthew Stockman/Getty Images)