Roger Federer (3) has won five matches at the 2011 French Open without dropping a set. That's a feat that not even Rafael Nadal (1) and Novak Djokovic (2) can claim. We'll find out soon enough just how good Roger is playing when he meets Djokovic in the Semi Finals at Roland Garros on Friday. Before we get to that tasty tennis morsel, Rafael Nadal will meet Robin Soderling (5).

Federer earned his date with Djokovic by steamrolling Gael Monfils 6-4, 6-3, 7-6 on Tuesday, Meanwhile, the Serbian heavy hitter advanced through the Quarter Finals without having to lift his racquet in anger. His would-be opponent, Fabio Fognini, wasn't able to play due to injury.

Djokovic beat Federer in the Semi Finals of the last two majors which is certainly on his mind.

"He's been playing fantastic this season, so I know I have to play some of my best tennis. I have a couple of days to prepare for that and come up with a good game plan," Federer said.

Defending woman's French Open champion Francesca Schiavone (5) battled back after getting smoked in the first set by Anastasia Pavlyuchenkova (14). Schiavone won the match 1-6, 7-5, 7-5 and will now face the winner of Na Li(6)  vs. Victoria Azarenka (4). 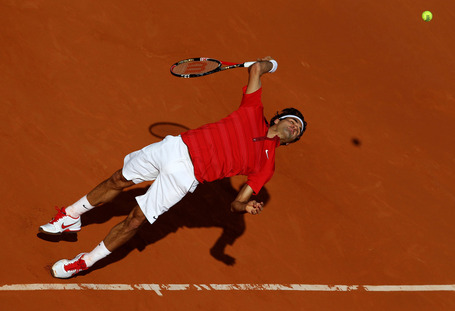