The 2011 NBA Finals schedule begins on Tuesday with Game 1 in Miami. The Dallas Mavericks bring the playoffs hottest shooter to the game, Dirk Nowitzki, to face LeBron James and the Heat. Miami has clearly been the better defensive team in the 2011 NBA Playoffs but they've not faced anything like the Mavericks' ball movement, outside shooting and bench scoring. Dallas did a good job defensively against the Trail Blazers and Lakers but struggled against the Thunder's wing scoring and big, aggressive guard.

Unfortunately for Dallas, the very things the Thunder did well offensively, the Heat do even better. LeBron James and Dwyane Wade are a more mature and dynamic version of Kevin Durant and Russell Westbrook. And while James Harden was a great addition at times, Dallas didn't have to worry about defending the paint against the likes of a Chris Bosh who's proven a few times in the playoffs that being the third star is well within his wheel house.

Mix in a revitalized Udonis Haslem to bang on Dirk and get under Tyson Chandler's skin and this series will likely end up with the hated Heat lifting the Larry O'Brien Trophy as the winner of the 2011 NBA Finals. For the Mavericks to win, Jason Kidd will have to defend Dwyane Wade and Shawn Marion will have to contain LeBron James for the entire series which is a tall task for those elderly gentlemen.

Here's the rest of the schedule for the series. 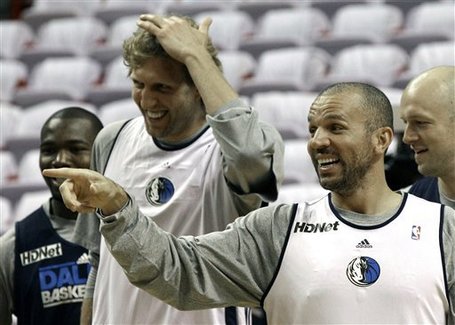