Rafael Nadal is playing great tennis and his cruise to through the 2011 French Open continued on Monday with another decisive win. Croatian Ivan Ljubicic was the latest victim of Nadal's brilliance in straight sets 7-5, 6-3, 6-3. In a more exciting match the always entertaining Gael Monfils (9) managed to eventually defeat David Ferrer (7) to advance to the Quarter Finals.

Monfils was up 4-1 in the fifth set before he pulled his usual trick and let off the gas. Ferrer fought back and tied the match 6-6 before Monfils woke up and put the set to bed by winning the next two games. The final score was 6-4, 2-6, 7-5, 1-6, 8-6 and with the win Monfils earned the right to face Roger Federer in the Quarter Finals.

Federer has yet to drop a set in his four matches thanks in large part to his incredibly accurate service game. Federer, once he puts Monfils away as expected, will meet up with Novak Djokovic who remains unbeaten in 2011. Novak has only dropped one set and that was to the talented Juan Martin Del Potro.

Djokovic didn't even have to play Fabio Fognini in the Quarter Finals since the Italian withdrew due to injury. Djokovic tweeted his pleasure:

Walkover from Fognini. Bad luck for him, hope he recovers fast. Today i get to enjoy Paris in a different way :-)

Robin Soderling and Maria Sharapova are still in action on the courts at the 2011 French Open. 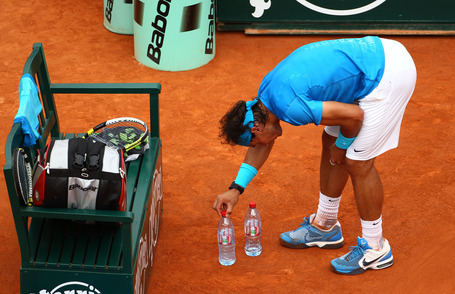