French Open TV Schedule: Round 4 Monday With Nadal And Murray

Share All sharing options for: French Open TV Schedule: Round 4 Monday With Nadal And Murray

The 2011 French Open resumes play on Monday with the clay courts of Roland Garros hosting stars Rafael Nadal and Andy Murray in fourth round play. So far, the tennis from the top seeds on the men's side can best be described as efficient. Novak Djokovic and Roger Federer demonstrated that again on Sunday as they cruised through their matches in straight sets. On the women's side, play continues to lack interest.

Monday, Day 9 of the 2011 French Open, will see Rafael Nadal take on Croatian vet Ivan Ljubicic in the second match of the day on Court Philippe Chatrier. Andy Murray plays in the third match on Viktor Troicki (15) on Court Suzanne Lenglen. Fifth-seed Robin Soderling and women's seventh-seed Maria Sharapova are also in action on Monday. Here's the full schedule for Monday. 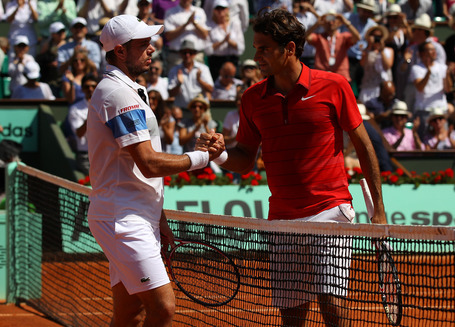 PARIS, FRANCE - MAY 29: Roger Federer of Switzerland shakes hands at the net with Stanislas Wawrinka of Switzerland after their men's singles round four match on day eight of the French Open at Roland Garros on May 29, 2011 in Paris, France. (Photo by Alex Livesey/Getty Images)