The 2011 Champions League Final, watched by the world's eyes, did not disappoint on Saturday as Barcelona completed the 90 minutes with a 3-1 win over Manchester United. The first half began and for the opening fifteen minutes it looked as though Manchester United's home advantage (English team playing on the English turf of Wembley) was going to pay dividends as they poured on the pressure and put the Barcelona back-line - containing Abidal and Mascherano - on the back-foot with direct balls up to Rooney and Hernandez.

The attacking endeavours of United, however, didn't reap any rewards and as the clock ticked through to the 15 minute mark, Barcelona suddenly flipped the switch and activated 'Massacre mode'. It's a mode they've been stuck in a for a large part of their domestic season and for the majority of the Champions League and for Manchester United, the second fifteen minutes of the match were experienced whilst in a state of fear - fear at the impending onslaught at the hands of the Spanish outfit.

Following near misses from midfielder Pedro (he was able to ghost in at the near post only to put the ball wide from 7 yards out) and from star striker David Villa, Barcelona watched on in disbelief as their warning shots went unheeded. On 27 minutes, Barcelona showed United and the watching world exactly what they were capable of as a beautiful defence splitting ball from Xaxi found Pedro whose solid finish sent Van Der Sar the wrong way.

Despite conceding an opener to Barca, Manchester United didn't throw in the towel, not even against a Barcelona team with a squad of players who wouldn't be out of place in a DC comic and in the 34th minute their resilience paid off. Taking a note out of Barcelona's 'Pass-pass-pass-pass-pass-shoot-score' book, a series of tight passes and one-twos eventually found Rooney at the penalty spot who applied a tidy finish to a Hernandez pass. That finish signaled United's intent and for the remainder of the half, they made Barcelona look human - something the Catalan club hadn't experienced very often.

At half time and at 1-1, the game was surprisingly even. United had spells where they made Barcelona uncomfortable and likewise, Barca had shown glimpses of what they could do to United given a little time and space. In the second half though, United and the estimated 400million worldwide audience would have front row seats to watch possibly the greatest club team in recent memory, tear apart the Premier League champions.

There will be many different things written about the way in which Barcelona played the second half of football and won their third Champions league title since 2006 and many of the pieces written will express all my thoughts but put them in far more eloquent ways than I can. All I can say is that Barcelona were playing football on an entirely different level. Their movement was intelligent. The passes they made were inch perfect and broke the game open, providing opportunities that spectators couldn't see from their seats, let alone being able to see them from pitch level. Technique, grace, power, vision.... they exhibited it all.

In the 54th minute, Messi showed any first time followers of football what all the hype was about as he notched Barcelona's second goal and one which enabled them to never look back. With Barcelona applying more pressure than Manchester United had experienced all season long, the ball fell to the feet of Messi with the Man Utd defence only yards away. Instead of turning back into the safety of his team mates, the 23 year old continued to stare down his opponents and struck the ball sweetly from distance and into the bottom corner of Van Der Sar's goal. Blame could be attributed to Vidic for refusing to move, for Evra for reacting too late to suitably close the Argentine genius down and for Van Der Sar for being out of position - all fair assessments - but the fact is that not many players in the world would have had the confidence or ability to take a shot at goal at that moment, a moment that seemingly came out of nowhere.

And when Messi capitalised on a mistake by United substitute Nani, and darted into the box, Manchester United were panicking. The ball squirmed free from the feet of Messi but found it's way to Villa on the edge of the box via Busquets and in the 64th minute he stroked the ball into the top corner and essentially ended the game. A top class-top corner strike from Villa was the cherry on the Barca sundae and epitomised everything that Barcelona have stood for since being under the command and guidance of Pep Guardiola.

Barcelona are mesmerising to watch and it's a credit to each and every member of the squad that they produce such scintillating football. On a night when the best teams in European football met at England's national stadium, there was clearly only one winner at the end... the fans.

Treated to 90 minutes of furious football, it's not a game many will soon forget. 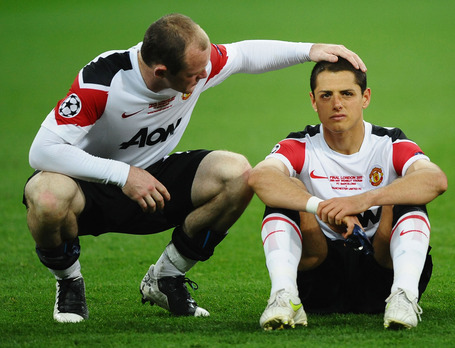