Heading into the UEFA Champions League Final, Manchester United have a completely healthy squad from which manager Sir Alex Ferguson can select his starting 11. The main decision Fergie will have to make will be whether to isolate Rooney up front in order to bolster his midfield and give his side the best chance at combating the triumvirate of Barcelona puppeteers - Xavi, Iniesta and Messi - or to give Barca coach Pep Guardiola food for thought by starting 22 year old striking sensation, Hernandez, up front with Rooney.

In midfield, Korean international, Park Ji-Sung, is likely to partner Carrick in the middle while Antonio Valencia will spend his time attacking the Barca left back from the comfort of the right wing. The most decorated United player, Ryan Giggs, will likely be given opportunity to put his off the pitch woes behind him as he occupies the left wing. There aren't too many signs of him slowing down despite being 37 years old and Barca will be well aware of the threat he poses having played against them in the 2009 final.

Defensively, Ferguson will be looking to start his solid central parring of Vidic and Ferdinand while it would be a shock to see anyone but French international, Evra, take up residence on the left hand side. The starting right back spot is still open with Brazilian twins Rafael and Fabio Da Silva eagerly awaiting the nod over his brother.

Standing between the sticks for the final time in his 21 year career, Edwin Van Der Sar will aim to bow out by keeping a clean sheet and by raising the Champions League trophy for the third time in his career. Van Der Sar was brought in by United in 2005 to replace the increasingly erratic Tim Howard (who has since changed his fortunes and been in excellent form for Everton) and has provided a solid foundation from which the rest of the team can push forward from. Romantics amongst you will be pulling for the big Dutchman to end his career on a high but there are at least 11 players lining up against him who will be doing their best to prevent that from happening...

Victor Valdés is the Barcelona number 1 and will undoubtedly be looking to keep Manchester United out in the CL Final for the second time in his career. The Spanish shot stopper has experienced first team football for the Catalan giants since the 2002/03 season in which time he has proved himself time and again by making important saves. Like his opposite number, Valdés will be eyeing his third Champions League winners medal when the final whistle blows.

Defensively, Barcelona have experienced some uncertainty in the last month with Puyol sidelined through a combination of hamstring and knee injuries while Eric Abidal was forced into spending time away from the game as he battled cancer. Heroically overcoming his illness has put him in the frame to start at left-back even though Puyol has declared himself fit and is possibly the favourite to gain the starting position.

Pique and Alves will fill the right and left back roles respectively to round out the back four.

Busquets and Mascherano will both be hoping that they are the one to claim the key defensive midfield role in an otherwise attacking Barca midfield and with Busquets holding that role while Mascherano moved to the back four recently, Guardiola may favour the born and bred Spanish international over the former Liverpool man.

Pedro, Iniesta and Xavi will man the engine room in the biggest game of the season and with Messi and Villa due to start up front, there is no end to the attacking ability Barcelona possesses.

The final lineups have been announced. The big surprise is Puyol on the bench. 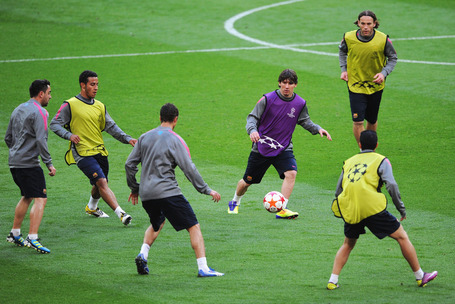 LONDON, ENGLAND - MAY 27: Lionel Messi of FC Barcelona controls the ball during a Barcelona training session prior to the UEFA Champions League final versus Manchester United at Wembley Stadium on May 27, 2011 in London, England. (Photo by Michael Regan/Getty Images)

The UEFA Champions League Final will be broadcast in the U.S. on Fox with kick off onSaturday, May 28 at 2:45 p.m. ET / 11:45 a.m. PT. Live online streaming is available (for a fee) at Foxsoccer.tv. The game will be played at Wembley Stadium in London.