The 2011 UEFA Champions League Final between two of the world's most popular sports teams is poised to shatter the viewing record set by the 2011 NFL Super Bowl. FC Barcalona of the Spanish La Liga and Manchester United of the English Premiere League will square off in a duel of giants. It's hard to put this match on the scale of American sports but it would be something like the Los Angeles Lakers and New York Yankees joining forces to play the Dallas Cowboys and Boston Red Sox.

Super Bowl XLV set a record with 162.9 million viewers while the 2011 UEFA CL Finals is expected to reach over 300 million TV watchers. The match features the world's most popular clubs who happen to currently have most of the top players including Lionel Messi and Wayne Rooney. It doesn't get any bigger than this according to reports from BBC.

BBC Sport - Football - Champions League: Live - Barcelona v Manchester United
BBC sports news correspondent Dan Roan: "Some say this could be the biggest single game of football ever played, such is the size and popularity of these two sides." That appears to be backed up by the view of one fan outside the stadium who said: "I am willing to spend £800 on a ticket". Asked if that was as much as it was worth, she replied: "It's worth more than that, but that's all I can afford."

Olly Foster on BBC World News: "It is expected that 300 million people will tune in to watch the game on TV tonight. That would be more than double last year's audience. This is THE match to watch and it should be a cracker."

The match starts at 8:45 p.m. in London which is 2:45 p.m. Eastern Time and 11:45 Pacific Time. In America it will be broadcast in HD by Fox Sports on their regular, main broadcast channel. Live online streaming is available on Foxsoccer.tv (for a fee). 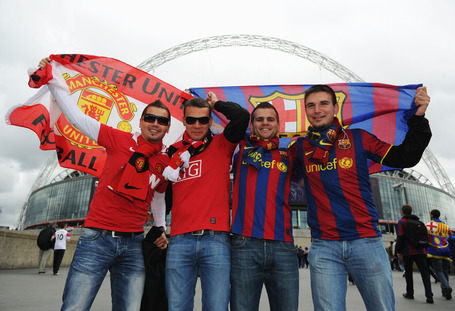 LONDON, ENGLAND - MAY 28: Barcelona fans enjoy the atmosphere ahead of the UEFA Champions League final between FC Barcelona and Manchester United FC at Wembley Stadium on May 28, 2011 in London, England. (Photo by Michael Regan/Getty Images)

For news, opinion, and feature articles leading up to the UEFA Champions League final, bookmark this StoryStream and check it often. We'll have new posts right here throughout the week, during the game, and after the game. For more on the entire world of footy, check out SB Nation Soccer. Manchester United fans should head over to The Busby Babe, whileBarcelona fans should check out Barca Blaugranes.