The top men in the 2011 French Open continue to roll through with fantastic tennis producing convincing results. Saturday Round 3 matches featured Rafael Nadal (1) and Novak Djokovic (2) both easily taking care of their business while the last American man standing, Mardy Fish (10) was knocked off. Brit Andy Murray (4) rolled his ankle pretty bad but was able to finish his match in straight sets. He's hopeful he can continue in the tournament but is in "wait and see" mode with the injury.

Nadal defeated Antonio Veic 6-1, 6-3, 6-0 to easily advance to a fourth round meeting with winner of Ivan Ljubicic vs. Fernando Verdasco (16). Djokovic split Friday's two sets with Juan Martin Del Potro (25) before play was stopped for darkness. The two resumed Saturday morning with the Serb easily rolling through, 6-3, 3-6, 6-3, 6-2. 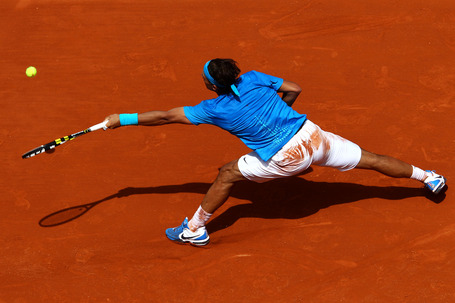 PARIS, FRANCE - MAY 28: Rafael Nadal of Spain stretches to hit a forehand during the men's singles round three match between Rafael Nadal of Spain and Antonio Veic of Croatia on day seven of the French Open at Roland Garros on May 28, 2011 in Paris, France. (Photo by Clive Brunskill/Getty Images)