We are just hours away from what all football (soccer) experts are predicting will be an epic battle between Spain's FC Barcalona and England's Manchester United in the 2011 UEFA Champions League Finals played at Wembley Stadium in London. The match schedule calls for a 20:45 start time on Saturday. That's 2:45 p.m. ET and 11:45 p.m. PT in America where the duel will be broadcast on Fox TV and available for live online streaming at Foxsoccer.tv.

* Barca Favored But Man United Has A Secret Weapon

This 2011 UEFA Champions Finals match features an assortment of the world's top players including the 2009 and 2010 FIFA Ballon d'Or winner, Lionel Messi (Barcalona). The Argentinian forward, only 23, is perhaps the best individual athlete on the planet in any sport. You'd be hard pressed to find anyone else as dominant in their sport at this point in time. Messi plays with an array of talented mates such as Xavi, Iniesta, and Alves. The Red Devils of Man United feature Englishman Wayne Rooney and their own young Latin star, Mexican Javier "Chicharito" Hernandez.

Sports book Bodog has updated odds with FC Barcalona as the favorite at -105 and Machester United at +300. The spread is Barca -1 with the over/under for the match set at 2 1/2 goals.

The UEFA Champions League Final will be broadcast in the U.S. on Fox with kick off onSaturday, May 28 at 2:45 p.m. ET / 11:45 a.m. PT. Live online streaming is available (for a fee) at Foxsoccer.tv. The game will be played at Wembley Stadium in London.

For news, opinion, and feature articles leading up to the UEFA Champions League final, bookmark this StoryStream and check it often. We'll have new posts right here throughout the week, during the game, and after the game. For more on the entire world of footy, check out SB Nation Soccer. Manchester United fans should head over to The Busby Babe, while Barcelona fans should check out Barca Blaugranes. 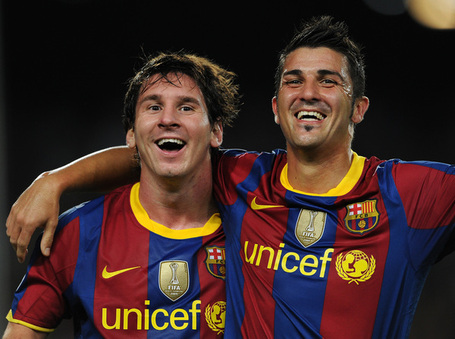