Kaylyn Castillo, heroine of Thursday night's Game 1 comeback win, hit a two-run home run in the first and Dallas Escobedo pitched a complete game four-hitter with nine strikeouts for the No. 1-seeded Devils, who are 55-6 and off to Oklahoma City next week for the fifth time in the past six years and ninth time overall.

The Devils scored two more runs and led 4-0 going into the sixth when the Aggies' Meagan May hit a two-run home run. But ASU was the team to celebrate on its home field at the end of the night. 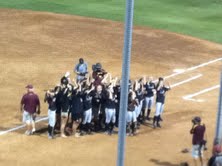 Castillo made a great play on a foul tip near her own dugout, the catcher reaching above the dugout and against a screen to make the catch.

ASU was the visiting team for Game 2, and had the Devils lost, a Game 3 was to be played later Friday evening. But they finished the job in two games and are on a collision course with arch-rival Arizona, the eighth seed, to open the WCWS. Arizona has to get by No. 9 Oklahoma in the Tucson super regional.