The very definition of a UEFA Champions League final takes place at Wembley on Saturday (schedule and TV info) as league winners from England, Manchester United, face off against Spanish title holders Barcelona. The Champions League has long been criticised for accepting and allowing teams who finish as low as fourth in their domestic leagues, to compete in the competition thus making a mockery of the term 'Champions'.

But this year there can be no complaints over credentials as the two teams primed and ready to do battle in the much anticipated final are arguably the best in Europe. Barcelona have brushed aside any and all comers en route to the final, even stamping on the heart of their fierce local rivals Real Madrid in the semi-finals while Manchester United can boast of similarly impressive victories during their campaign, as they were drawn against Premier League rivals Chelsea in the quarter-finals, a battle which saw United walk away 3-1 victors.

As United and Barca take to the pitch to contest the final, there will be flashbacks to the 2008/9 season when the two teams met at the same stage of the competition, on which occasion the Spanish giants outfought their English opponents and lifted the trophy following a 2-0 victory. In that win, they were led by the diminutive Argentine genius, Lionel Messi, a man for whom every superlative has been used and who has been continually brilliant as he has notched a ridiculous 49 goals in 52 games in all competitions this season.

Supporting Messi again this season is the midfield duo of Xavi and Iniesta and it is through this trio of footballing artisans that much of Barca's best play occurs - something United will need to stifle if they are to have any chance of gaining revenge for the 08/09 Final.

For the Premier League champions, this year will be their third finals appearance in four years (a feat last achieved over 15 years ago by AC Milan) and unlike La Liga winners Barca, their most potent weapon isn't on the pitch but rather in the stands where Sir Alex Ferguson holds an unparalleled amount of experience and knowledge with which to battle the Catalan club.

Fergie has attempted to divert attention away from his club leading up to the final, a commonplace tactic by the master of mind games, but with the off pitch antics of long serving Ryan Giggs undermining his manager's efforts and proving an unwanted distraction, the wily Scot will need to call upon all his years of experience in order to get his squad focused on stopping the footballing equivalent of a runaway train and prevent the seemingly inevitable.

Saturday is as big an occasion as there is in European football and although Barcelona are the favourites to lift the trophy thanks to their clinical style of football, there is simply no way a Manchester United side that has rarely failed to rise to the occasion under the guidance of Sir Alex, can be ruled out. 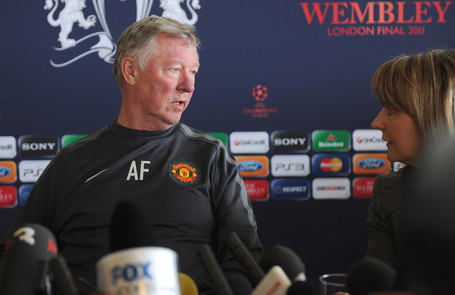 MANCHESTER, ENGLAND - MAY 24: Manchester United manager Sir Alex Ferguson speaks to his press officer during a press conference ahead of the UEFA Champions League Final against Barcelona at the Carrington Training Ground on May 24, 2011 in Manchester, England. (Photo by Michael Regan/Getty Images)

Editor's Note: This article was provided by an English friend of ours who did a very good job keeping his bias out of the narrative.