Fantastic Finish For Sun Devils In Game 1 Of Super Regional

Share All sharing options for: Fantastic Finish For Sun Devils In Game 1 Of Super Regional

The ASU Sun Devils softball team was on the verge of something that had happened very few times this spring -- losing.

Except the Devils won. ASU scored two runs in a wild bottom of the seventh inning -- its last ups -- and sits one win away from a fifth straight trip to the Women's College World Series in Oklahoma City.

Kaylyn Castillo's seeing-eye ground ball with two strikes, two out and the bases loaded went off Texas A&M shortstop Brittany Walker's glove and allowed the tying and winning runs to score in ASU's 3-2 NCAA super regional win. Game 2 is Friday at 6 p.m. at Farrington Stadium, and if necessary there will be a Game 3 immediately following Game 2.

The standing-room only crowd of 2,037 was treated to a thriller. A&M hit two solo home runs off Devils ace Dallas Escobedo, the only two hits the freshman from Phoenix St. Mary's allowed. Escobedo (31-3) struck out 15 batters, nine of those in the first three innings. 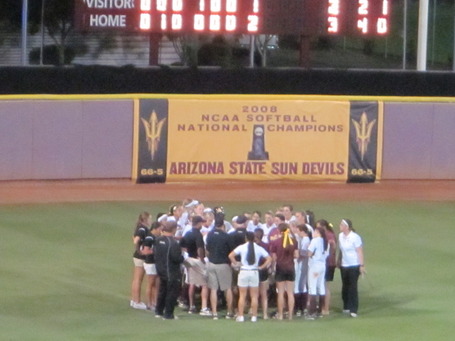 The Sun Devils (54-6) loaded the bases with two out as Aggies pitcher Melissa Dumezich came undone after a stellar six innings. Dumezich had given her team a 2-1 lead in the top of the seventh with a home run, and needed three outs for the win. But she walked two batters, threw a wild pitch, hit another batter and gave up Castillo's hit.

The ball neared shortstop just as ASU's Katelyn Boyd ran to third base, and Walker lost sight of it. She didn't field it and the ball went off her glove and into center field. Texas A&M asked the umpiring crew to discuss whether it was intentional interference on Boyd's part, but they ruled it wasn't.