The Miami Heat proved once again that in a close series the difference often comes down to the final few possessions. Just like the Dallas Mavericks, the Heat came from behind late in the game to beat the Chicago Bulls and advance to the 2011 NBA Finals. The series is both a rematch of the 2006 NBA Finals and a chance to see LeBron James and Dirk Nowitzki go head-to-head in crunch time. It should be a blast.

The Miami Heat with a NBA regular season record of 58-24 will host the Dallas Mavericks who went 57-25. Game 1 will be in Miami on Tuesday, May 31 at 9:00 p.m. ET / 6:00 p.m. PT with ABC holding the TV broadcast rights. The schedule format changes in the NBA Finals with the first two games at home, followed by three on the road and then the final two back on the home court of the team with the better regular season record.

Over the coming days we will get more into the specific match ups and ultimately will make a prediction on this series but here's some immediate thoughts. The Dallas Mavericks have the deeper team but are woefully undersized at the two guard. They will need a fantastic series from Shawn Marion defending LeBron James and of course, Dirk has to be Dirk and Jason Kidd and Jason Terry and J.J. Barea need to knock down threes.

The Heat have the best two players and have proven they can both play defense and score in crunch time. Dwyane Wade didn't have a great series against the stingy Bulls' defense but he should have more room to roam against the Mavs. Miami shouldn't have too much trouble scoring but is going to have a much harder time defending Dallas' ball movement and outside shooting.

Here's the full schedule for the 2011 NBA Finals with all games broadcast on ABC TV: 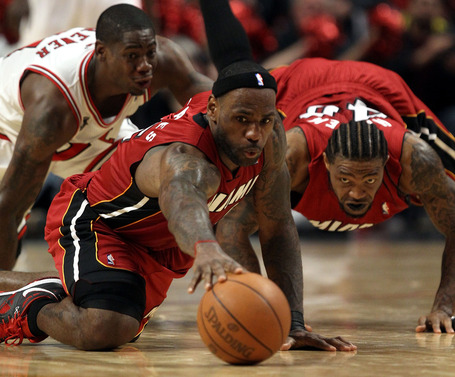 CHICAGO, IL - MAY 26: LeBron James #6 (C) and Udonis Haslem #40 of the Miami Heat dive for a loose ball against Ronnie Brewer #11 of the Chicago Bulls in Game Five of the Eastern Conference Finals during the 2011 NBA Playoffs on May 26, 2011 at the United Center in Chicago, Illinois. The Miami Heat beat the Chicago Bulls 83-80 and advance to the 2011 NBA Finals to meet the Dallas Mavericks. (Photo by Jonathan Daniel/Getty Images)