The 2011 French Open saw it's first major upset of the tournament when the No. 2 seeded woman, Kim Clijsters, lost in 2nd Round play. The stunning result throws open the women's singles draw on the bottom side of the bracket. In other early action on Day 5, American Mardy Fish (10) advanced while his countryman Sam Querrey (24) was defeated. Andy Murray (4) and Robin Soderling (5) both advanced to the third round. Rafael Nadal has yet to finish his match.

Clijsters won her first set against 114th-ranked Arantxa Rus of the Netherlands 3-6 and had a match point opportunity in the second set that she blew. She went on to lose 7-5 and then was crushed 6-1 in the final set. After the match she said confidence was the problem.

"I started doubting a little bit," said Clijsters, who was playing only her second match since a right ankle injury knocked her out of action. "When you start doubting yourself on any surface, but for me definitely on clay, it's the wrong attitude to have."

Mardy Fish is the lone remaining American man after Sam Querrey was defeated by Ivan Ljubicic 7-6, 6-4, 6-4. Fish advanced to Round 3 after easily beating Robin Haase of the Netherlands 7-6, 6-2, 6-1. 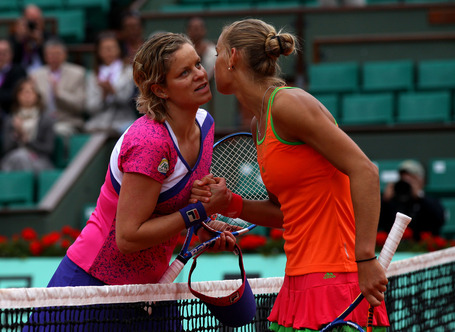 PARIS, FRANCE - MAY 26: Arantxa Rus (R) of Netherlands celebrates her victory during the women's singles round two match between Arantxa Rus of Netherlands and Kim Clijsters of Belgium on day five of the French Open at Roland Garros on May 26, 2011 in Paris, France. (Photo by Alex Livesey/Getty Images)