The Dallas Mavericks used another late push to eliminate the young Oklahoma City Thunder and earn their way into the 2011 NBA Finals. Dallas is an impressive 12-3 in the 2011 NBA Playoffs and have used a combination of veteran savvy, desire, and a huge dose of Dirk Nowitzki brilliance to breeze through what was considered a very strong compliment of Western Conference teams.

Dallas now waits for the winner of the 2011 NBA Eastern Conference Finals series between the Miami Heat and Chicago Bulls. The Heat are up 3-1 in that series with Game 5 on the schedule for Thursday. While Dirk has been the difference late in games for the Mavericks, it's been LeBron James shredding the myth that he can't close out games and proving that he, not Derrick Rose, is the true MVP of the NBA.

The Mavericks will get at least five days off to rest before Game 1 of the 2011 NBA Finals and they could get an extra two days if the Heat can't take care of the Bulls quickly. Game 1 is scheduled for Thursday, June 2 but the NBA has allowed for an early start on Tuesday, May 31 if both conference finals finish early.

With the Heat beating the Bulls in Game 5, the NBA has announced the following schedule for the 2011 NBA Finals:

The Miami Heat have home court advantage in the series. 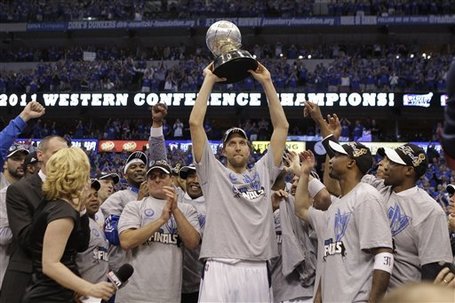