LeBron James and the Miami Heat face Derrick Rose's Chicago Bulls in the first elimination game of their 2011 NBA Playoffs Eastern Conference Finals series. The Heat hold a commanding 3-1 lead over the Bulls and with a win Thursday could schedule a rematch with the Dallas Mavericks in the 2011 NBA Finals. The Mavs were able to take care of their business and eliminated the Oklahoma City Thunder in their Game 5 to win the Western Conference Finals 4-1.

The Heat have a tougher task ahead with their playoff elimination game coming on the road where as the Mavs were able to play Game 5 at home. Dwyane Wade and LeBron James, while certainly motivated, don't seem to have the same burning hunger that drove veterans stars Dirk Nowitzki, Shawn Marion and Jason Kidd to put away Kevin Durant's young Thunder team.

The task of staving off elimination got more difficult for the Bulls with news this week that their backup center, Omer Asik, will is out with a broken leg. It's going to take an absolutely brilliant performance from Derrick Rose to keep the Bulls from going home with just one win. The Heat, like the Mavs, proved that experience and having the better player will make the difference in a close playoff game. It's been LeBron James coming up huge time and again in late game situations that's put Miami ahead three games to one. 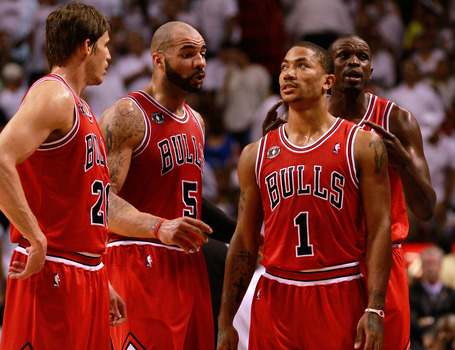 MIAMI, FL - MAY 24: (L-R) Kyle Korver #26, Carlos Boozer #5, Derrick Rose #1 and Luol Deng #9 of the Chicago Bulls look on against the Miami Heat in Game Four of the Eastern Conference Finals during the 2011 NBA Playoffs on May 24, 2011 at American Airlines Arena in Miami, Florida. LeBron James. (Photo by Marc Serota/Getty Images)