The Oklahoma City Thunder are down 3-1 to the Dallas Mavericks after losing both home games in their 2011 NBA Playoffs Western Conference Finals series. The two teams are back in Dallas Wednesday for Game 5 that could, and most likely will, end the series and send the Mavericks back to the NBA Finals for a probable rematch with the Miami Heat.

The Miami Heat are also just one game away from the NBA Finals after they were able to come through in overtime to beat the Chicago Bulls 101-93 in Game 4. The Heat lead the series 3-1. LeBron James and Derrick Rose duked it out in the final minutes and while Rose might be this year's MVP, there's no one who can doubt that James is still the better player. LeBron scored 13 points in the the fourth and overtime periods while Rose went just 1-8 and scored six points.

It was the bench play turned the tide in this close game. The Heat were able to get 33 minutes of solid defense and rebounding from Udonis Haslem and Mike Miller finally showed signs of life and scored nine points in the fourth quarter.

The Oklahoma City Thunder should be in this series but blew a 10-point lead in the final minutes of Game 4 at home. It was a sign of a young team who hasn't learned how to win in the playoffs and overcome a little adversity. In that case it was James Harden fouling out. Without Harden, Russell Westbrook and Kevin Durant couldn't score enough to fend off an unstoppable charge from Dirk Nowitzki.

OKC mostly likely won't survive the mental blow that comes with losing a playoff game in such fashion and the Mavericks are a veteran team that smells blood on the court. Expect the 2011 NBA Playoffs Western Conference series to end with a Mavericks victory. Game 5 between the Mavericks and Thunder tips off at 9:00 p.m. ET / 6:00 p.m. PT on ESPN. (NBA.com video preview of Game 5.) 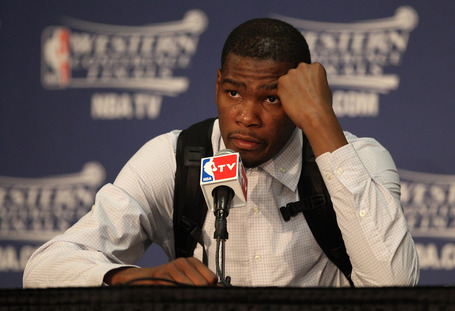 OKLAHOMA CITY, OK - MAY 23: Kevin Durant #35 of the Oklahoma City Thunder addresses the media after the Dallas Mavericks defeated the Thunder 112-105 in overtime in Game Four of the Western Conference Finals during the 2011 NBA Playoffs at Oklahoma City Arena on May 23, 2011 in Oklahoma City, Oklahoma.(Photo by Christian Petersen/Getty Images)