2011 French Open Results: Round 1 Was Not Kind To America

Share All sharing options for: 2011 French Open Results: Round 1 Was Not Kind To America

There were seven Americans who stepped on the red clay courts for Roland Garros on Day 4 of the 2011 French Open. Two walked off victorious. Among the losers from the United States was big John Isner who pushed Rafael Nadal to five sets but wasn't able to beat the defending champion at his own game.

The French Open isn't a tournament that favors the Americans who hardly ever get a chance to play on clay as kids. Personally, I would love a chance to give it a try but can only imagine how difficult the surface must be if you aren't used to it. Of the 18 American's who entered the tournament wearing Stars and Stripes, only six remain.

Brit Andy Murray (4) rolled through his completely unknown opponent in three-straight sets but showed more of his Scottish temper on the court. He was visibly angry at his opponent's attempt to muck things up during the match.

"It was a tough match. There was no rhythm really to the match," Murray said. "He didn't want to have any long rallies, so he was hitting a lot of drop shots, going for shots. He'd change the rhythm or change the pace of the ball a lot."

Here's a look at some of the more notable results on Day 4 of the 2011 French Open. Wednesday is the start of Round 2. 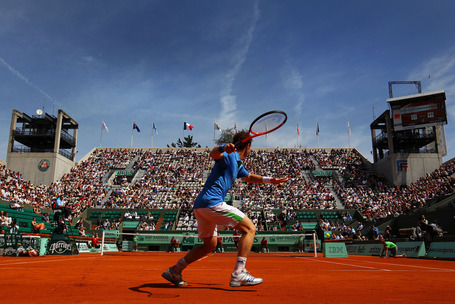