The Oklahoma City Thunder proved once again that if you have a major team flaw the NBA Playoffs will expose it. They went down 3-1 to the Dallas Mavericks in embarrassing fashion. The Chicago Bulls schedule calls for a heavy dose of LeBron James and the Heat defense on Tuesday with their Miami leading their 2011 NBA Playoffs Eastern Conference Finals Series.

Both the Bulls and the Thunder suffer from the same problem — neither team is able to generate good looks in the half court. The Bulls have even fewer offensive weapons than the Thunder but are a better defensive team. Oklahoma City is virtually helpless without James Harden on the floor once the defense focuses in on Kevin Durant and Russell Westbrook.

In both conference finals of 2011 NBA Playoffs the team with the best player on the court who’s been able to generate and hit shots. Dirk Nowitzki and LeBron James have proven to be the real stars and while both the Heat and Mavericks are flawed teams in their own right, they seem destined for a rematch in the NBA Finals. 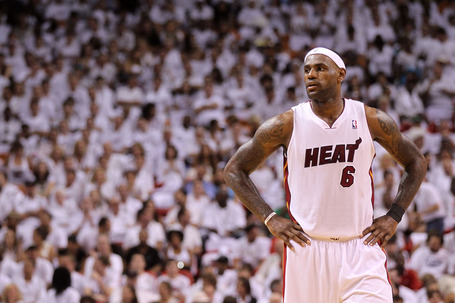 MIAMI, FL – MAY 22: LeBron James #6 of the Miami Heat looks on against the Chicago Bulls in Game Three of the Eastern Conference Finals during the 2011 NBA Playoffs on May 22, 2011 at American Airlines Arena in Miami, Florida.(Photo by Mike Ehrmann/Getty Images)