The First Round of the 2011 French Open continues on Tuesday with Rafael Nadal taking center stage and center court on Day 3. Rafa will be joined by second-seed Kim Clijsters, along with charismatic Scotsman Andy Murray (4) and the ever-popular Maria Sharapova (7).

Nadal has won eight of the last nine French Open titles. He's the star of Roland Garros until someone knocks him off. Rafa's match is the third to take the stage at Court Philippe Chatrier on Tuesday. He faces American John Isner. Isner is 6-foot-9 and famous for his giant serve and his 11-hour marathon match against Nicolas Mahut at Wimbledon in 2010.

Isner doesn't have much else in the way of game his his serve is of much less value on the slow red clay of Roland Garros. With the first match scheduled for 11:00 a.m. in Paris (5:00 a.m. ET), Nadal's match should start around 9:00 am ET on the Tennis Channel depending on the length of the two earlier women's matches.

Other notable Day 3 matches include Andy Murray (4) vs. Eric Prodon and Maria Sharapova (7) vs. Mirjana Lucic.

The Tennis Channel will broadcast live action in morning from 5:00 am to Noon ET with ESPN 2 picking up the TV broadcast from 12:00 p.m. to 6:30 p.m. ET. ESPN 2 is promoting the Kim Clijsters vs. Anastasiya Yakimova match as it's showcase. The Tennis Channel also streams select matches online. 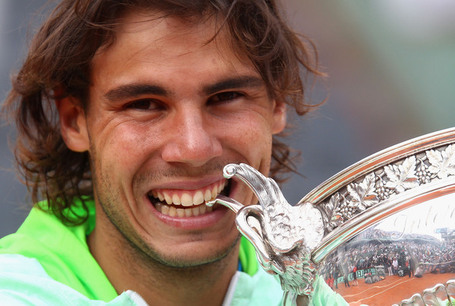