Monday, Day 2 of 2011 French Open action is in the books and there was only one First Round upset at Roland-Garros. Sixth seed, Tomas Berdych was beaten by Stephane Robert in five sets. Both Novak Djokovic (2) and Roger Federer (3) won their matches easily and on the women's side top seed Caroline Wozniacki also cruised through her match.

"I was serving really, really well and being very aggressive, using every opportunity to step into the court," Djokovic said. "I was quite in control of the match."

"That for us is the most frustrating part...the tournaments all changed to the Roland Garros ball after last year. Roland Garros has changed their balls again. Now we're stuck with a different deal for all the different ATP Tour events," Federer said. 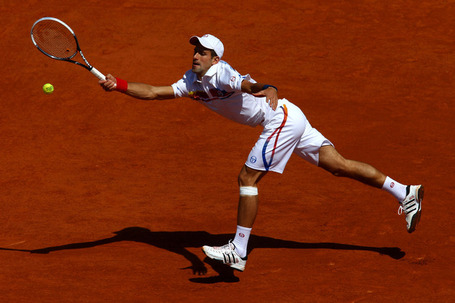