The Monday schedule for the 2011 NBA Playoffs features the Dallas Mavericks holding a 2-1 lead over the Oklahoma City Thunder playing Game 4 in OKC. All the talk is Russell Westbrook and his league-high turnover numbers and more importantly, his inability to get Kevin Durant the ball. This isn't news as much as it another example of the NBA Playoffs doing what they do -- expose players' and teams' flaws.

The Thunder can beat the Mavericks in Game 4 without Westbrook dishing the ball like Steve Nash, but as a team they are going to do a few things better. They absolutely can't go 1-17 from the three-point line as they did in Game 3. That's a given. They also need to relax and trust each other. Not uncommon for young teams, each player is trying to do too much on their own and the ball is not moving nearly enough.

The Thunder have several mismatches on the perimeter and especially need Kevin Durant to take advantage any time Peja Stojakovic is on the floor and James Harden can attack Jason Terry and create opportunities. OKC did a great job in turning a blow out game into a contest that at least lasted 48 minutes and forced the Mavericks into playing their starters until the final minute. Keeping pressure on the older team will pay off down the road, assuming the Thunder can win Game 4 and tie the series which guarantees at least two more games.

For the Mavericks to beat the Thunder on their floor for the second-straight game, they need to play aggressive perimeter ball denial defense on Kevin Durant. Shawn Marion had his best game of the series so far which carried Dallas to the win. They will need either Marion or one other perimeter player -- DeShawn Stevenson or Jason Terry -- to play great ball and compliment Dirk Nowitzki's shooting prowess. Dirk had an off game on Saturday which won't likely happen again. 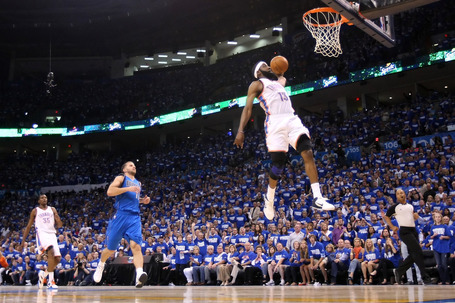 OKLAHOMA CITY, OK - MAY 21: James Harden #13 of the Oklahoma City Thunder dunks the ball in the fourth quarter while taking on the Dallas Mavericks in Game Three of the Western Conference Finals during the 2011 NBA Playoffs at Oklahoma City Arena on May 21, 2011 in Oklahoma City, Oklahoma.(Photo by Christian Petersen/Getty Images)