The Miami Heat hope to do on Sunday what the Oklahoma City Thunder couldn't on Saturday. The 2011 NBA Playoffs schedule has been full of surprises, and the Thunder going 1-17 from three and still being within striking distance of the Mavericks in the final minutes ranks up there. If Derrick Rose's Bulls can have a similar effect on LeBron James shooting abilities the result would probably be much worse.

All the talk after Chicago lost Game 2 at home was Derrick Rose poor shooting but his 7-23 game was only his third-worst of the 2011 NBA Playoffs and not much worse than his 10-27 and 11-27 games against the Hawks. Facing a better Heat defense and LeBron's ability to score in the clutch in the postseason make it mandatory that the Bulls get more scoring from Carlos Boozer, Luol Deng or even the cold-shooting Kyle Korver.

Someone needs to step up and score for the Bulls because Rose can only carry that team so far and the offensive system isn't dynamic enough to create open shots. For the Heat the question is how much can they get from Udonis Haslem in his second big game back. If he continues playing at near the level he did in Game 2, this series is over. 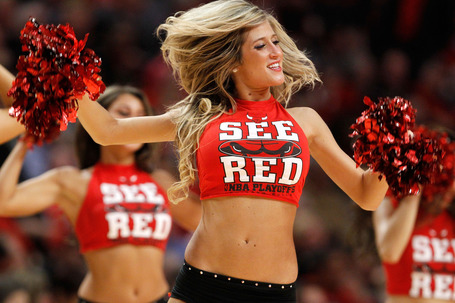 CHICAGO, IL - MAY 18: Cheerleaders from the Chicago Bulls perform against the Miami Heat in Game Two of the Eastern Conference Finals during the 2011 NBA Playoffs on May 18, 2011 at the United Center in Chicago, Illinois.(Photo by Gregory Shamus/Getty Images)