The post time for the 2011 Preakness Stakes is just hours away and we've got a final look at the updated morning line which still has the favorite listed as Kentucky Derby winner, Animal Kingdom. At 2/1 odds, a lot of people are betting not just on the horses ability to run well on Saturday but on the hope of a possible Triple Crown winner for the first time since Affirmed in 1978.

Here's a look at some final picks and predictions from the experts and handicappers.

Matt Gardner from And Down The Stretch They Come:

PREAKNESS 2011: Preview and Picks - And Down The Stretch They Come
The Pick There is no way I can take 2/1 on Animal Kingdom for a win bet in this spot... Dialed In's 9/2 morning line odds are decent, but I'd really like to see 5/1 or better. If Shackleford gets bet down from his ridiculous 12/1 morning line price (which I think he will), then there's a chance Dialed In will drift up on the tote board...I'll probably go with a two-pronged strategy for a trifecta/exacta wager in this race: one play will have Dialed In on top, with Norman Asbjornson, Dance City, Mr. Commons, Animal Kingdom and Mucho Macho Man in the 2nd and 3rd spots.

The second prong will depend on how the board is treating Animal Kingdom; if he drifts up enough in price (or the "will pays" suggest some value to be found), I'll play a ticket with the Derby winner over Norman Asbjornson and Mr. Commons, and maybe Dance City.

Preakness 2011: Will Animal Kingdom win again? - The Early Lead - The Washington Post
The Post’s Andrew Beyer thinks Animal Kingdom, the Kentucky Derby winner, might just have the staying power to win the second leg of the Triple Crown, beating out Dance City.

Jerry Izenberg and Tom Luicci from The NJ Star-Ledger:

Preakness 2011: The Star-Ledger's picks | NJ.com
1. DIALED IN Great blanket finish with these three closers right there. Dialed In was not overused in the Derby, and a faster pace up front should make him a winner. 2. ANIMAL KINGDOM Can win it for the same reasons I think Dialed In will. 3. MUCHO MACHO MAN Has hit the board in every race, is maturing and a heck of a good bet.

1. DIALED IN Beaten Kentucky Derby favorite never got the fast early pace he needed but still blazed the final half in 47-seconds flat to rally from 19th to eighth. 2. DANCE CITY Third-place Arkansas Derby finisher was toughened up by that race and has a running style that will keep him close throughout. 3. ANIMAL KINGDOM The Derby winner has only been first or second in five career starts but has never had to wheel back after just two weeks — and after a big effort like the one he had at Churchill. 4. MUCHO MACHO MAN Comes off a solid third in the Kentucky Derby and hasn’t ducked anyone, with the Preakness marking his sixth straight try against graded stakes company.

And finally the updated morning line from Bodog:

The 2011 Preakness Stakes gets underway on May 21 at Pimlico racetrack. Stay with our 2011 Preakness Stakes StoryStream for odds, contender profiles, post positions and more. To look back at the Derby, check out our 2011 Kentucky Derby StoryStream. Also, our horse racing blog And Down The Stretch They Come has two must-read resources for Derby and Preakness fans: A Beginner's Guide To Following Horse Racing and a glossary of horse racing terms. 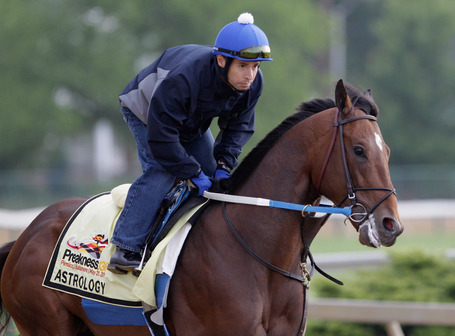 BALTIMORE, MD - MAY 20: Exercise rider Carlos Rosas takes Preakness entrant Astrology over the track at Pimlico Race Course on May 20, 2011 in Baltimore, Maryland. The 136th running of the Preakness Stakes will take place on May 21. (Photo by Rob Carr/Getty Images)