The best series still left standing in the 2011 NBA Playoffs resumes Saturday in Oklahoma City when the Thunder host the Dallas Mavericks in Game 3 of the Western Conference Finals. The schedule won't give the elderly Dallas team much rest from here on in so we'll have to see if Dirk Nowitzki, Jason Kidd and Shawn Marion can bring the energy they will need to keep up with young Thunder. Kevin Durant certainly isn't going get tired.

The question facing the the Thunder isn't about rest. The issue they have to deal with is Russell Westbrook's inconsistent and immature play. OKC needs the Westbrook who put up a triple double in Game 7 against Memphis. They need him to take care of the ball and be aggressive but not so aggressive that he's taking shots away from his talented teammates. 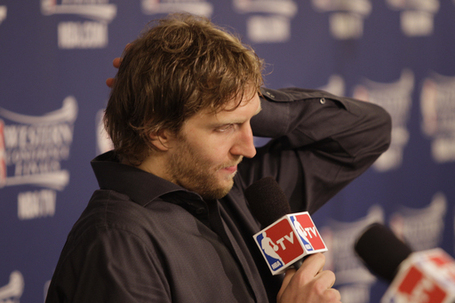 DALLAS, TX - MAY 19: Dirk Nowitzki  #41 of the Dallas Mavericks talks to the media after loosing to the Oklahoma City Thunder in Game Two of the Western Conference Finals in the 2011 NBA Playoffs on May 19, 2011 at the American Airlines Center in Dallas, Texas.  (Photo by Danny Bollinger/NBAE via Getty Images)