James Harden Vs. Russell Westbrook, It's Not Even Close

Share All sharing options for: James Harden Vs. Russell Westbrook, It's Not Even Close

We are biased, but that doesn't stop the facts from being what they are. The fact is James Harden has been a better all around basketball player in the 2011 NBA Playoffs then the highly touted (and in my opinion, overrated) Russell Westbrook.

If you've been watching the Thunder at all, you've seen the offense stall countless times with the ball in Westbrook's hands as he drives into traffic and takes bad shots.

At the end of the third quarter of Thursday's Game 3 in Dallas, coach Scott Brooks had enough. After yet another turnover, Brooks benched Westbrook for the fourth quarter and instead of blowing a 16-point lead like they did against the Grizzlies, the Thunder out-scored the Mavericks 29-24 and won a huge road playoff game.

I love James Harden and had the pleasure of watching him play at Arizona State so clearly there's a bias. I've interviewed both players several times and it's obvious between the two who is more mature and shows more signs of being a great leader. All that aside, however, the numbers are also clearly in favor of Harden.

It's decision making that really sets the two apart. Former coach and ESPN analyst Jeff Van Gundy has said time and again on the broadcast that Harden is the better passer with the better court vision and does a much better job setting up his teammates. Here's two examples:

This play started as a high pick and roll with Perkins setting a good screen on Barea. Westbrook first took the ball left into open space but cut back to the middle into congestion. At the point you can see in the screen shot below, he's boxed in on his left with Jason Kidd and Shawn Marion in front of him.

Instead of making an easy pass to a wide open James Harden or a harder pass to an open Kevin Durant at the far wing or a dump down to an open Ibaka in the paint, he pulls up for a contested shot that he missed. 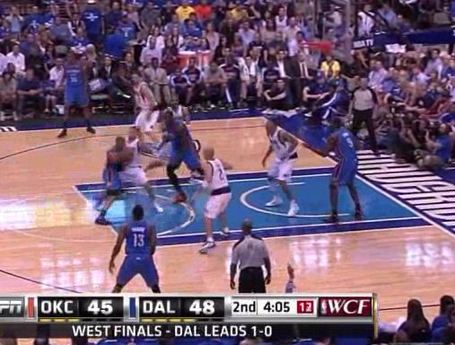 In this example James Harden ran a high pick and roll with Ibaka and drove the lane. The Dallas big came over to cut off his path to the rim but instead of tossing up a tough shot, Harden made a nice, but difficult, pass to Ibaka who got an open lay up. 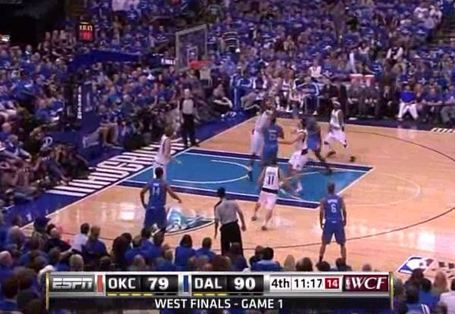 These two examples typify the differences between Westbrook and Harden. Westbrook, supposedly a point guard, is always looking to shoot the ball which allows defenses to focus on him even more. If he saw the floor and was able to make quicker decisions, he would not only get his teammates good looks, but it would open things up for himself more as well since defenders couldn't cheat off so much.

Harden, who doesn't have near the speed, explosiveness, or ability to shoot off the dribble as Westbrook, uses his body well and makes better decisions. He can finish in traffic and can certainly shoot the ball, but he is the far better passer of the two.

It was a brave move for Scott Brooks to sit his temperamental and immature point guard in the fourth quarter of a playoff game. It's up to Westbrook now to show what kind of man he is when he steps on the court in Game 3. Can he put that behind him and learn the lesson and grow as a player or will he sulk and take even more bad shots?

The OKC Thunder need Russell Westbrook to play well to advance to the NBA Finals. So far, he's only shown glimpses of being a top-notch point guard. We'll find out Saturday what he's made of.