The 2011 NBA Playoff schedule gives us a day off on Friday. A well-earned break for the players and a much needed rest for the fans who have been blown away so far with both the Eastern and Western Conference Finals Series. The Miami Heat bounced back from getting whooped in Game 1 with a defensive clinic to beat the Chicago Bulls and even that series. The Oklahoma City Thunder used unexpected bench scoring to achieve the same result over the Dallas Mavericks.

In both series the team with the home court advantage lost it and now has to prove they can win on the road to advance to the 2011 NBA Finals. The Bulls struggled finding points as they've done countless times in the playoffs and while their defense was solid, the Heat had LeBron James to push them over the hump in the fourth quarter. James also defended Rose on numerous possessions late in Game 2.

We said all along that match ups are going to be a problem for the Mavericks in this series. Shawn Marion did a poor job on Kevin Durant which forced Dallas to go to DeShawn Stevenson who can't rebound or score as effectively. The Thunder did a better job mixing up their coverages on Dirk Nowitzki and a key that doesn't get enough credit was the adjustment on J.J. Barea to prevent him from doing too much damage. Here in Arizona we're not surprised to see James Harden step up. He's a big time player and is getting the national recognition that he deserves.

Read: James Harden vs. Russell Westbrook, It's Not Even Close 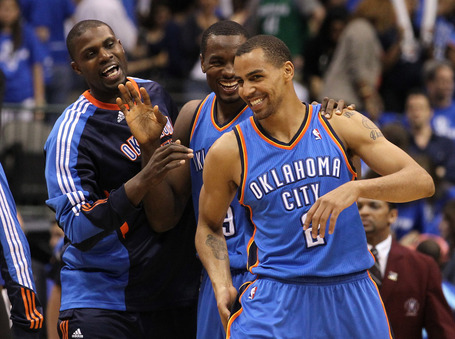 DALLAS, TX - MAY 19: (R-L) Thabo Sefolosha #2, Serge Ibaka #9 and Nazr Mohammed #8 of the Oklahoma City Thunder react late in the fourth quarter before the Thunder defeat the Dallas Mavericks 106-100 in Game Two of the Western Conference Finals during the 2011 NBA Playoffs at American Airlines Center on May 19, 2011 in Dallas, Texas.(Photo by Ronald Martinez/Getty Images)