UFC 129 Results: Ben Henderson Back To Winning After Pettis Kick

Share All sharing options for: UFC 129 Results: Ben Henderson Back To Winning After Pettis Kick

The last time we saw Ben Henderson in the ring before Saturday night's UFC 129 event it was in his hometown in Glendale, AZ. Henderson was defending his WEC lightweight title and a win over Anthony Pettis would have positioned him for a chance at the post-merger UFC belt.

Instead what happened back in December in the fifth round of an incredible back and forth bout was one of the greatest moves in the history of MMA. Pettis ran up the side of the cage and took down "Smooth" with a kick that still echoes in the minds of fans. If you need to see it again, click here for our cageside coverage of WEC 53 and video of Pettis' Showtime Kick.

Saturday in Toronto at UFC 129, Henderson had a chance to work his way back towards a belt. He squared off against Mark Bocek who considered himself "the best Brazilian jiu-jitsu (BJJ) in the lightweight division."

According to SB Nation's MMA Mania, Bocek had a few chances to submit Henderson but just as he did against Pettis, "Smooth" proved too slippery to be locked up.

The closest Bocek came to finishing the fight was with a mixture of guillotine attempts and an anaconda choke in the second round but the "Smooth" one twisted free and, in the turning point of the fight, leaped forward with multiple knees that connected with Bocek's head. Even Bocek's red hair couldn't mask that his dome had been cracked and he was leaking blood profusely.

At multiple points, a frustrated Bocek was forced to pull guard and attempt sweeps off of his back. The story of the fight was a mixture of Henderson's speed, craftiness and athleticism outworking Bocek's technique and plodding pace.

Henderson won the fight on a 30-27 decision and he put himself right back in the mix in the lightweight division. 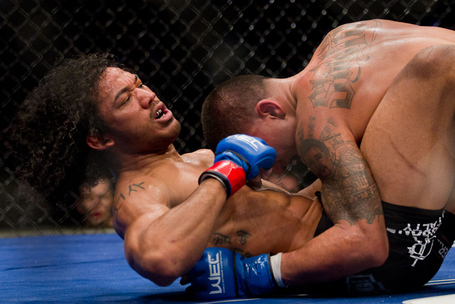