Patrick Peterson, now a member of the Cardinals, and Prince Amukamara, a local kid drafted by the New York Giants, are going to have a lot more than their Arizona connections binding their careers. Just days after the 2011 NFL Draft we are seeing a rumor that Amukamara slipped to 19th because of stereotypes about Nigerian players. Meanwhile, Peterson who was picked by the Cardinals 14 spots higher, scored in the single digits on his Wonderlic test which didn't seem to bother many analysts.

In this report on National Football Post, the feeling is that small hands and short arms weren't the only reason for Amukama's slide in the draft.

"A lot of NFL people are skeptical about Nigerian players like Amukarma. "And it's not just white men," one executive said. "It's whites and blacks." It's still a subtle form of racism. The word on Nigerians: they are soft, not tough enough and too educated. It would be a pity if that's what cost Amukamara."

If Prince needed more ammunition to fuel his career as a Giant, this is it. 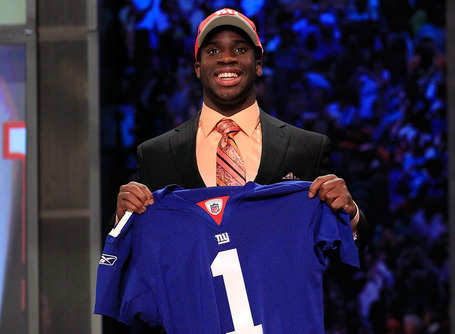 Prince Amukamara, #19 overall pick by the New York Giants, holds up a jersey on stage during the 2011 NFL Draft at Radio City Music Hall in New York City. (Photo by Chris Trotman/Getty Images)

Peterson, on the other hand, seems to have dodged all concerns about his exceptionally low Wonderlic test score. Back in March, Yahoo! Sports reported the Peterson got just nine questions right out of 50 on the test and tied for the lowest score among all defensive backs.

According to the story, at least one scout has concerns.

"The more I'm around him, the more I love him even more. I love the kid, and I love the talent. But I don't like the way he plays with his back to the ball. He has an instinct issue, and I think it's tied to his mental [ability]. He can only handle so much."

It's the first negative thing we've heard about Peterson so far. We'll have to wait and see if the low test score translates to a disappointing career for Peterson.

The path facing Amukamara is the same for anyone dealing with a negative racial stereotype. All he can do is go out on the field and prove the detractors wrong.