The Oklahoma City Thunder and Dallas Mavericks continue their 2011 NBA Playoffs Western Conference Finals Series on Thursday in Texas. Unlike the more generous schedule in the East, there are no long breaks for these two teams. Every game is played with only one day's rest which certainly favors the younger Thunder team. Kevin Durant and Russell Westbrook hope they can repeat the Game 2 feat from LeBron James' Miami Heat and tie the series with a road win.

With a different officiating crew that's not so prone to calling every tiny bit of contact, Game 2 should be a bit more reasonable when it comes to free throw shooting and big scores. We wouldn't expect to see Dirk Nowitzki take 24 shots from the line and put up 48 again and while Durant and Westbrook will get to the line, it probably won't be for a combined 37 attempts.

The match ups and schedule in this series favor Oklahoma. Thursday's Game 2 will show us if that's enough to overcome the Mavericks' experience and Dirk's brilliance. A Thunder win would put the Mavericks on their heals headed into two home games and a schedule that won't allow Dirk, Jason Kidd, Jason Terry and Shawn Marion much time to recover between games.

Defensively, the Thunder need to be patient with Nowitzki. Don't double team him early in the game and don't pressure him so hard that he drives and draws fouls or help defenders. Work him hard before the catch to move him off his spots but give him the mid-range jump shots even if he's making them. He won't likely hit 80 percent of them again.

For the Mavericks it's all about transition defense. They can't turn the ball over or take bad shots that lead to easy points for the Thunder. The OKC half court game is a work in progress, the more they can force Westbrook to run the offense and make good decisions, the better. They have to get more pressure on Durant before he catches the ball and at times mix in a full ball denial defense but can't get caught over playing too much or the Thunder will adjust as they did against the Grizzlies. 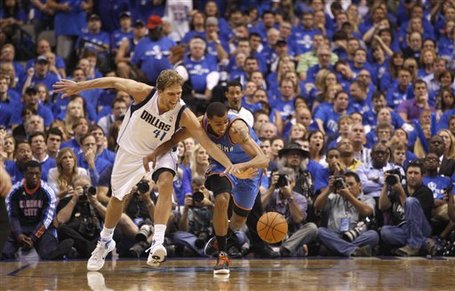