Game 1 went to the Dallas Mavericks and the story line is obviously the brilliant game from Dirk Nowitzki. He was on fire and as unguardable as any jump shooting player you will ever see. The Oklahoma City Thunder, however, have nothing to be ashamed about and in fact, they should extremely confident heading into Thursday's Game 2 of the 2011 NBA Playoffs Western Conference Finals. As great as Dirk was, Kevin Durant was better and with a slightly different set of variables, this series can easily tilt towards the Thunder.

This was a classic Joey Crawford and Bill Kennedy officiated game. Those are two of the most notoriously tight refs when it comes to calling the slightest contact, especially on the perimeter. Both teams benefited from this and in fact the Thunder had 43 free throw attempts compared to 36 for the Mavericks.

In future games that are officiated in a more "normal" way, the Mavs will be in trouble. In Game 1 Dirk was the beneficiary of a LOT of calls on his perimeter jump shots that he won't continue to get. The Thunder did get some ticky-tack fouls as well but with both Russell Westbrook, Kevin Durant and James Harden all attacking the paint, they are much more likely to earn free shots in this series.

The Mavericks looked a bit rusty in the first quarter but after shaking that off, the eight full days off really showed. That will carry over into Game 2 as well but for the rest of this series there's only one day off between each game. If the Thunder can steal Game 2 they will be sitting very pretty. If not, they will still have an edge that continues to move in their favor as the series moves on. The older Mavs are not going to have the legs to shoot 53 percent all series long.

The Mavericks zone defense threw the Thunder off a bit. They are a young team and didn't have much time to prepare for this series. But they will adjust and continue to take advantage of the many mismatches they have on the floor. Dallas is forced to use the zone because Peja Stojakovic can't guard Durant, Jason Kidd or Jason Terry can't guard Westbrook, and J.J. Barea can't guard anyone.

The Thunder will need to improve a bit on the defensive end but will continue to punish the Mavericks perimeter defenders and put incredible pressure on Tyson Chandler to defend everything. We saw the Magic struggle with the same problem and they had Dwight Howard as the back stop.

Barea has a habit of coming into the fourth quarter and lighting teams up. You could see the Thunder weren't ready for him and Brooks panicked when he tried to match down by playing Nate Robinson. I doubt we see that mistake again.

The Thunder did a fantastic job staying close in Game 1 despite all the advantages in the Mavericks' favor. Game 2 between the Thunder and Mavericks is schedule for Thursday at 9:00 p.m. ET / 6:00 p.m. PT on ESPN. If the Mavericks lose that game, they are in serious trouble. 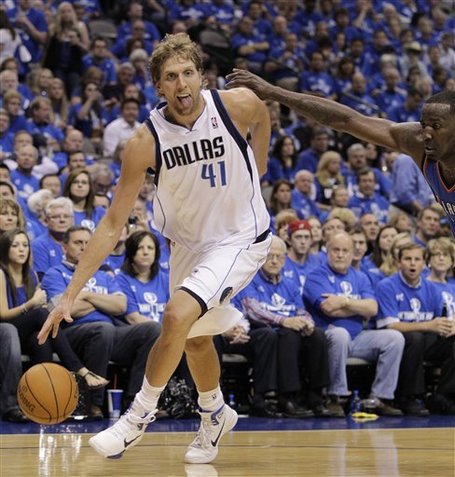