Share All sharing options for: NBA Playoff Schedule: Revenge Of The LeBron

Game 1 between the Chicago Bulls and Miami Heat was an interesting affair. It was a tight game through the first half and then the Bulls defense locked up LeBron James and Dwyane Wade and held the Heat stars to just 11 combined points. Game 2 of the 2011 NBA Playoffs Eastern Conference Finals is on the schedule for Wednesday and should answer the burning question of this series -- are the Bulls that good or were the Heat just mentally and emotionally unprepared for this series.

There's a lot of noise out there that the Heat are going to collapse after their 21-point loss but I don't see it happening. There was a time earlier in the season when it was fair to question the mental toughness and heart of LeBron's "Super Friends" but these guys have bounced too many times. As much as we might want to hate them, I would expect a much better Game 2 showing against Derrick Rose and his group.

Even with the Heat playing better, as they almost certainly will, the game is still in Rose's hands on the offensive end. In his last two games he was much better with his shot selection and the Chicago attack was far more balanced. But Rose alone won't win this series with his shooting. Luol Deng and Carlos Boozer need to play big on the offensive end and since Rose has the ball at the start of every possession, it's on him to make that happen. 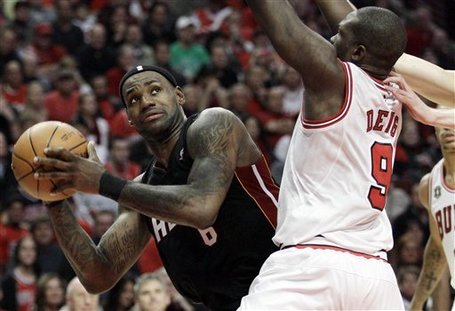